Two new Cheetah Catamarans sailed to European waters in May. The first, 9m White Eagle sailed to her homeport of Neeltje Jans in Holland at the beginning of the month, closely followed by 10.2m Bon Vivant which translates as the Good Life, two weeks later.

Both Cheetah catamarans are versions of the 10.2m hull with the short foredeck and feature the long style wheelhouse accommodating up to 5 anglers. White Eagle, a 9m with a 2.1m wheelhouse features accommodation in each hull, with a gas hob, sink and dinette in the main cabin as specified by the new owner. Bon Vivant, the 10.2m features a generously sized 2.5m wheelhouse fitted with a port side table and seating for 5, a cabin forward in the starboard hull and a toilet in the port hull.

Bon Vivant is one of the first boats in Europe to be powered by two of the new Honda 250hp outboards. On sea trials, new owner Tony Verlinden recorded top speeds of 38 knots with 4 persons and fuel onboard. A full Simrad electronics package includes NMEA link providing real time fuel data with figures of 2.24litres per mile cruising at 21-22 knots for the catamaran.

9m White Eagle joined two other Cheetahs mid channel for a spot of fishing enroute to Holland. The Cheetah is fitted with the new Steyr diesel engines with Bravo 2 Drive. On her trip home Chris Van Raak reports tops speeds of 38.4 knots and a 25/26 knot cruising speed.

'After launching the boat with a crane in Ventnor Haven in the evening of 27th of April, we had to wait for enough water in the haven on Saturday morning to do a test run and we sailed afterwards direct to East Cowes Marina. Wonderful to feel the power and speed with the two quiet running diesel engines. After a stormy weekend I sailed the boat over on my own to my homeport NEELTJE JANS in Holland. From Dover to the Sandetti Banks it was really rough with waves of 1.5 - 2 m. Easily 20 knots through this seastate without a single slam.
The trip took 210 miles, and I stopped underway where another 2 Cheetah owners were fishing for seabass on wrecks. 10 hours from the start at East Cowes I arrived in my homeport.
Everyone is very excited, and not the least about the stunning looks of my boat, but most important for fast, stable, very good in the waves, very good at anchor and I can earn a living with this boat , because of the low fuel consumption with this high cruising speed. Well done Cheetah Marine.'

Tony Verlinden reports
'We left Ventnor at 6am on the morning of 17th of May to sail the boat the 174 miles home. From Ventnor to Eastbourne we had holes in the sea of 1.5m to 2m. We did 20 knots cruising without any problem. After Eastbourne the seastate eased down and we cruised then at 25 knots. Going up and down in revs to run engines in, we averaged 21.3 knots average on the trip from Ventnor to our homeport BLANKENBERGE in Belgium. I'm very satisfied with this boat'

Jan de Jonghe, the Cheetah Marine representatives in Holland and Belgium comments on the success of Cheetahs.
'Cheetah Catamarans are popular amongst professional and private anglers in Belgium and Holland because the modern design provides a safe and economical working platform.
Keeping weight down through the construction process means it is possible to use smaller outboards reducing initial engine costs and keeping fuel consumption to a minimum. The twin engine combination is safe, as is the stability offered by the catamaran configuration which handles short wave conditions in the North Sea with ease.' 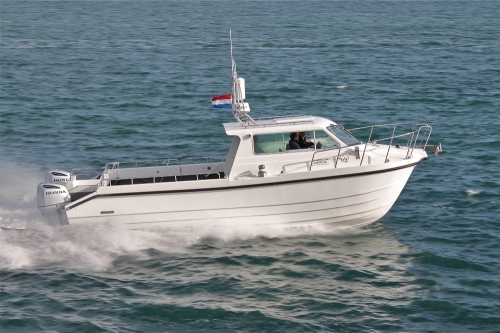