Cheetah Marine International Limited have just completed the second Hydrographic Survey Cheetah for SinoHydro, a Chinese Hydropower engineering company. The vessel will be stationed in Bangladesh and will be deployed for hydrographic survey applications in the Padma Multi-purpose Bridge Project.

Survey tasks undertaken by the Cheetah include depth sounding and current profiling. The vessel is fifth of the new 8.5m x 3.4m series which is Cheetah’s latest hull design.

The new series was designed to sit between the super successful 7.9m and the larger beamed 9m model offering a large walkaround option and the ability to carry heavier engines like the Cox diesel outboard. The first of the series was built as a high speed superyacht tender and accommodated twin Almarine Waterjets and Volvo D4 engines.

The new hydrographic version features a more conventional propulsion package with twin Yamaha 150hp outboards producing top speeds of over 30 knots and a steady cruising speed of 18-20 knots at 3500rpm. Below deck, two 180 litre custom built fuel tanks provide a range of 200 miles at 15 knots depending on the currents in the river.

Cheetah Marine have fitted a Fisher Panda 8000i 8kva (6.4kw) generator system with dual Durasea rooftop air conditioning systems to keep productive and comfortable conditions in the hot climate of Bangladesh. The 8.5m Cheetah features two mounting points for deployment of survey equipment, a sidemount for ADCP and the single beam echosounder as well as the central moonpool for deployment of the widebeam MBES.

The 7 year Padma Bridge is the largest construction to date in Bangladesh and will form the major link to connect the south west, north and eastern regions. The dynamic river systems are constantly changing, shifting sand banks and islands. Extreme flow particularly throughout the monsoon season makes it difficult for even larger ships to make headway against the flow. The shallow draft of the 0.5m enables the vessel to perform complex surveys in the rapid flowing shallow water zones with minimal crew.

With a moonpool frame built in 50mm stainless steel tube, Cheetah’s patented Hydropod system accommodates the R2 Sonic 2024 transducer head.The system ensures high accuracy of the fixing position meaning that recalibration after transit is not required and is easily transported between survey sites.

Cheetahs vessels have been commended as the most compact and efficiently transportable hydrographic survey package available whilst accommodating a wide scope of tasks in a range of sea conditions. Current builds on order include commercial fishing, leisure, patrol and charter. 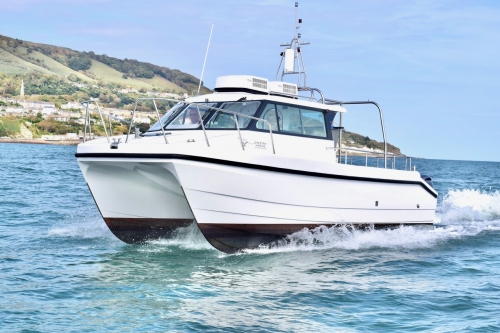