When Stewart Ward first went out in Cheetah Marine’s demo catamaran ‘Free Spirit’ there was no turning back. Straight out into the seas off of the South of the Isle of Wight where the Cheetah Catamaran concept was first engineered. Stewart recalls ‘the worst bit was getting onto the boat from the pontoon it was so rough. Once we were out the harbour, she took off the first wave and instead of the expected slam, she hit the sea with a cushion. ‘Free Spirit’ took the rough weather in her stride’

Sean Strevens, Cheetah Designer was a commercial fishermen fishing from a surf beach when his catamaran design caught on. Twenty years later, over 240 Cheetah Catamarans have been built and the designs have developed for all manner of applications. More and more leisure boaters are taking advantage of the rough weather capabilities and stability offered by Cheetah Catamarans. Stewart will have the same benefits as Sean. He can go to sea when he wants, knowing that fishing from his new 8.9m Cheetah ‘Reel Busy’ will be comfortable and safe in some of the roughest sea conditions.

Stewart had looked at various catamarans on the market and ideally wanted a fast craft for fishing offshore wrecks some 20 – 60 miles from his base on the River Crouch in Essex. The Cheetah Catamaran appealed as it lended itself flexibly to other workboat applications and as an ideal hydrographic survey boat. The 8.9m Cheetah was seen as the ideal size and Sean and Stewart set about designing the Ultimate Angling Craft. Input from the customer is encouraged at all stages of build to ensure Cheetah develope the best possible craft.

Following the launch of ‘Reel Busy’ in February, Stewart and Sean drove her from the Isle of Wight to her new base in Essex. The journey took 8 hours, some 165 miles by sea.

"As we were still running in the engines we cruised at 20 knots. There was a nasty tide rip as we rounded the corner near Margate but we didn’t need to slow her at all. Cruising back through the Thames Estuary we were able to cut across banks saving time and fuel as she only draws about 40cm"

‘Reel Busy’ has an extensive internal fit out and will easily double up as a hydrographic survey craft. She has been coded to MCA Category 2, 60 miles from a Safe Haven with 6 onboard. The long spacious wheelhouse has been fitted out with starboard side work bench complete with galley, sink, burner and microwave and port side bench seat with storage under. Helm and Navigator’s suspension seating are fitted on storage pods overlooking a wide dash accommodating an extensive range of navigational and angling electronics including the Olex System, Koden Radar and Sounder, Seiwa Explorer Chart Plotter.

With a large stable deck, ‘Reel Busy’ makes an excellent fishing platform. 11 rod holders are fitted in the gunwales and to the wheelhouse overhang. Twin 225hp Honda outboards are fitted to moulded engine pods behind the transom. A 200litre bait storage tank has been fitted into the space between the engines leaving the deck clear for fishing. Stewart specified an additional echosounder transducer and waterproof display screen. Both have been fitted at the stern of the craft enabling Stewart to check depths when drifting over wrecks and shallows without having to go back into the wheelhouse. 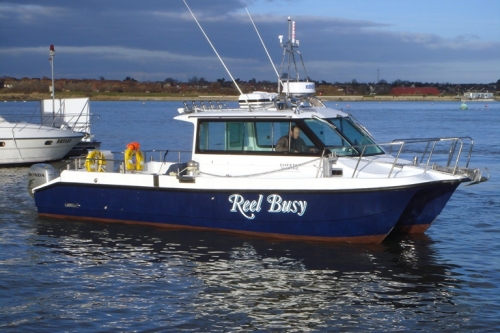