Chris Roberts, a successful charter skipper from Salcombe had been researching different catamarans for a number of years. When another Devonshire fisherman made plans to visit Cheetah’s workshop last August, Chris decided he might as well jump in for the ride.

Chris’s company Salcombe Angling aboard ‘Anglo Dawn’ has become one of the most popular charter companies on the south coast. Having discovered a life long obsession for fishing at the age of 4, Chris worked on many commercial fishing vessels both at home and abroad before embarking on his own charter fishing company in Salcombe.

‘I always wanted to go down the catamaran route, and the trip aboard Rob Downer’s 10.2m potting Cheetah just finished it off ‘ comments Chris. Chris decided to move things forward and placed an order for a 9.98m x 3.7m on the spot. ‘It’s been great watching the new Anglo Dawn throughout the build process and I can’t wait to start fishing’

As well as operating the new Anglo Dawn for charter angling, Chris and crew Malcolm specialize in bass fishing, both commercially and on charters, cruising up to 25 miles to various wrecks, reefs and banks. The Skerries is a well known sandbank off the coast of Devon which is well known for its catches of plaice. With some seriously good fishing ground just twenty minutes from the harbour they have an abundant species list literally on the doorstep including bass, plaice, cod, rays, turbot and Pollack.

With a good opportunity to test and run the engines on the way home to Salcombe, Chris tested the 9.98m hull at different engine rpm. On the 126 mile home trip, the twin 135hp Hondas consumed a total of 220 litres of fuel producing an average of 1.7 litres per mile. The voyage took 6 hours with Anglo Dawn running at various speeds from a sober 16-20 knots at 3500 – 4200 rpm with short blasts at full throttle, producing top speeds of 27-28 knots.

‘She’s turned a few heads, even amongst the crabbers.’ Comments Chris.

Due to a proven success rate leading to popularity amongst serious anglers, Chris is sponsored by Snowbee. As leaders in top quality fishing gear, Snowbee enjoy’s the benefits of their equipment being used by many anglers aboard such a successful charter boat. With the highest regard to quality, Snowbee shares a similar ‘buy well, buy once’ philosophy as Cheetah Marine, with emphasis on designing, developing and testing the product inhouse.

Russell Weston, Managing Director, Snowbee (UK) Ltd comments: “We were delighted when Chris decided to join us, as one of a small, select group of Snowbee Sponsored Charter Boats. In line with our tackle, we only select “the best” and Chris certainly meets this criteria, with a top reputation for ‘finding fish’! His new Cheetah Cat looks an awesome piece of kit & we can’t wait to get out with him, for a day’s fishing.”

Commercially, Chris and Malcolm will also be rod and lining with the option of netting. The boys are planning round trips up to 45 mile east into Lyme Bay and offshore.

Visually, the major eye catcher of Anglo Dawn is the vast quantities of clear deck space available for fishing. The deck features a large underdeck storage compartment with deck wash. Behind the wheelhouse a storage box housing a Honda generator doubles up as a bench.

There is extra gunwale space on the starboard side where Chris has opted for an offset wheelhouse with starboard walkway forward. The wheelhouse features port side curved seating with table and a starboard galley featuring microwave, sink and kettle behind the helm. Two access doors in the dash lead to a port side toilet compartment and starboard side berth.

For fishing charters Anglo Dawn is MCA coded to Category 2, 60 miles with 10 passengers and two crew. As a commercial fishing boat she conforms to Seafish Certification.

Sean Strevens, Cheetah Designer comments ‘The 9m to 11.2m Cheetahs are very good for a mix of commercial fishing and angling charters. They perform well on the drift with the low windage hull and wheelhouse design. This hull is also suited to the commercial fishing environment where rough weather capabilities are very important.’

Cheetah Marine has several exciting projects underway including a walkaround version of the same Anglo Dawn hull which will be tuna fishing in the south of France. 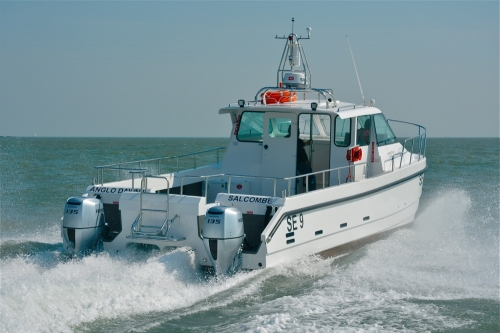