9.2m 'Cheetah' debuted at this years Southampton Boatshow has now joined the growing fleet of Cheetahs working from the continental coast. The past 4 years has seen an influx of Cheetahs for professional fishing, survey and angling to many Dutch and Belgium harbours.

Current regulations in Belgium and Holland known locally as the Lowlands, do not allow commercial operators to reclaim petrol duty as is possible in the UK. Cheetah Marine first built and installed converted gas Honda outboards for two harbour patrol catamarans 15 years ago. Whilst in the UK the marine gas conversion market never materialised, in Holland and Belgium it is a different story.

Spurred on by the demand for cars to run on LPG, the conversion technology has significantly advanced. With LPG readily available at many fuel stations in the Lowlands it has become a very cost effective alternative for commercial boaters who are at sea for hundreds of hours each year. Several Cheetahs have been converted for the use of LPG gas on the outboards with average fuel costs at a third of the petrol equivalent.

There will be no shortage of tackleaboard ‘Cheetah’ which is owned and operated by Johan Demeulenaere of Hengelsport Demeulenaere, an angling shop in Roselare. ‘Cheetah’ is built as a professional bass fishing catamaran, measuring 9.2m overall and has a beam of3.7m. The catamaran is powered by twin 250hp outboards which can run on both petrol and LPG. Cheetah have installed twin 250 litre petrol tanks under the deck for petrol operation. The engines were converted in Holland by Garage Rijnzicht from Katwijk.

Cheetah joins 3 other Cheetahs working from Nieuwport in Belgium and is the fifth Cheetah this year sold by Belgian Agent Jan de Jonghe. A second 9.2m was collected by Gerrit Baudewijn and sons Davy and Kennethin early Summer. Top speeds of 40 knots provided plenty of time to stop off at several wrecks on the voyage home for the Baudewijns to familiarize themselves with the boat and equipment.

Jan comments "Now everyone in the Lowlands know how good the Cheetah cats are in rough weather. And even the diehards who preferred diesel inboards understand that outboards (petrol and diesel outboards) are the future in this kind of boats. It took a while to convince me also, but now I'm completely behind outboards. This success is mainly due to the trials with the 9.2 and10.2 in Belgium, but only when there's 5-6 BFT. The ugly, short waves on the Belgian coast makes it impossible to have a soft ride with most other boats.The Cheetah proves that a soft, fast ride is possible in these conditions without any slam.”

And to complete the trio, a third 9.2m, was delivered by road to Blankenberge to Robert Steigrad who will complete the build in his own time. Watch this space for more additions to the Lowland Clan.

And for a full report in Dutch featured in ZEEHENGELSPORT visit: 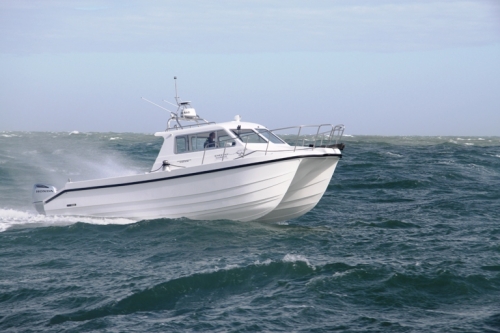