The 7.9m has proved to be the most popular cheetah of 2012 with deliveries to various hydrographic survey companies as far afield as Russia and Canada. The award to the most interesting specification however, goes to Yellowfin, based in our home waters of Falmouth. Husband and and wife team Keith and Caroline, have built up years of experience, fishing the Cornish coast in various monohulls and after spending 18 months looking for the idealboat decided on a bespoke build with Cheetah Marine.

On Keith and Caroline's quest for the perfec tboat they found themselves on the Isle of Wight looking at a second hand 6.9m Cheetah. Keith being a particularly tall chap liked the benefits of the good stability and gunwale height and decided to look into the Cheetah catamaran option further. As they were on the Isle of Wight a spontaneous visit to the Cheetah works seemed the logical step. The appeal of a bespoke build which would deliver a Sportsfishing boat as opposed to a standard pleasure craft was the deciding factor and after three days the Collings placed an order for a7.9m with a raised cabin.

The design continued to evolve into a very specific catamaran which included:

- an open transom to allow fishing between the Honda 115hp outboards

As a fully bespoke model Yellowfin was exhibited at the Southampton Boatshow where she attracted considerable attention. Keith then joined Sean for the delivery voyage to Falmouth when the build was fully completed in early December. Yellowfin averaged 22 knots withtop speeds of 31 knots.

Keith comments 'The trip down was absolutely fantastic , very smooth and the integrated Simrad electronics package worked absolutely perfectly. I was very impressed with the handling and Caroline and I cannot wait to get out together so she can beat me to the first fish!'

Keith and Caroline will be fishing from Falmouth up to 5 miles offshore. Now they have the added security of a catamaran they will eventually travel to deeper wrecks further offshore. The plan is anything goes, as now they can go fishing year round even if they are just heading up the river.

NEXT DELIVERY: Tomorrow we will start driving the full length of the UK from our base on the south of the Isle of Wight to the North of Harris via Inverness and Ullapool.If you see our blue Landy nearly dwarfed by a 7.9m behind give us a wave. xx Happy New Year 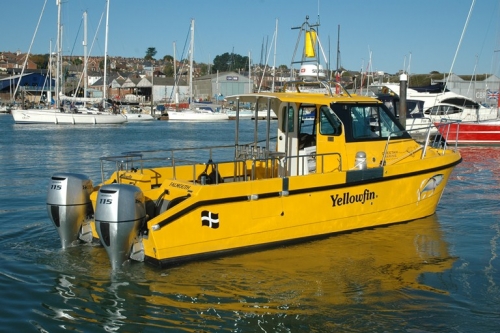