The latest commercial Cheetah Catamaran features a unique outboard jacking system. Combined with an overall length of 9.98m, the stern jacking system maximizes deck space providing the largest working deck on any Cheetah and possibly the most space efficient under 10m fishing boat.

New owner and fisherman Simon, already a Cheetah owner decided to upgrade from his 7.9m Cheetah which he took delivery as a Stage B build in 2004. The new Cheetah provides a massive 25m² deck space with a partitioned forward screen providing a port side enclosed cab whilst maintaining protection from the elements when hauling on the starboard side.

The Porta Hydraulic Transom Bracket, developed in the States, features a hydraulically controlled travelling parallelogram. When the pods are in their full horizontal rectangle the engines are at their lowest in the water. Raising the tilting system folds the parallelogram flat in an upright position to lift the engines their highest out of the water. The engines can also be tilted and trimmed independently.

The 9.98m Cheetah is the commercial version of the 10.2m series first developed in 2010 and which can be built at any overall length from 9m – 11.2m. Initial design specifications included a high weight carrying capacity and economical cruising speeds, both essential requirements for all netting and potting boats.

The Cheetah has been fitted with twin mercury 150hp engines providing economical cruising speeds at 20knots. On the maiden voyage from Cheetahs base at Ventnor to Southampton, some 30 miles, Simon reported fuel consumption of under 2 lites per mile at 18 – 20 knots at 3200rpm and 25 knots at 3600rpm

A flush deck hatch provides access to a storage compartment housing a diesel powerpack and fuel tank. Simon plans to complete the fit out whilst still fishing from his old 7.9m Cheetah.

Cheetah Marine will be launching a succession of 7.9m catamarans in the late Autumn with two Cheetahs destined for government hydrographic work in Ukraine, a 7.9m for CIDCO a Canadian survey company and a 7.9m leisure / angling Cheetah for Lewis, Scotland. Soon to be launched is a 6.2m which will be towed down to the west coast of Portugal as part of the Cheetah European Development trials. 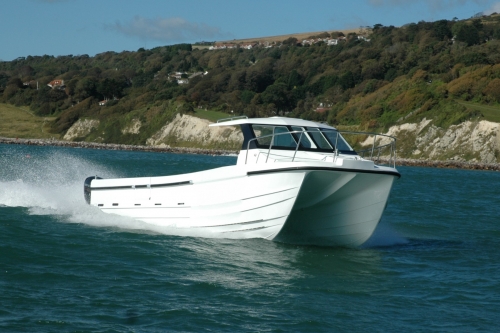