Two Cheetah 7.9m survey vessels have left the Isle of Wight destined to work in the extreme temperatures of Ukraine. With summer temperatures touching 30 degrees Celsius and winter chill reaching -30 degrees, the project offered a new challenge to the tried and tested Cheetah.

Following a visit from a Ukraine delegation to the Isle of Wight, Sean and Lucy Strevens travelled to Kiev last February to confirm the contract with the Hydrographic Office.

The trip was successful and the specification of the two boats was agreed. The 7.9mLong Wheelhouse was chosen with the design based on the Port of London Authority survey Cheetah, “Galloper”.

The long cab houses helm and navigator’s seats on storage pods and a port side work top with stainless steel 19 inch computer racking below mounted on rubber suspension units. A starboard side bench seat with storage beneath and a folding keyboard table completes the accommodation. A 2Kva Honda generator supplies additional power for survey and navigation lights and computers. Shorepower including RCD and MCB and a range of both 12v and 240v sockets are fitted.

Both vessels are powered by twin 115hp Yamaha outboard engines, specified by the client. Twin 150 litre inbuilt aluminium fuel tanks will give the boats a range of approximately 150 miles at cruising speed, 16 – 18 knots. Surveying work speed will be 6 - 8 knots.

The survey specification includes a moonpool and blanking plate, stainless steel frame and awning which will take the Moonpool Hydropod at a later date and a swinging stainless steel davit. A starboard side door is also fitted.

A prime requirement in the contract was the ability to crane the boats from the water to a mothership or a trailer. Three stainless steel lifting points in the central wavebreak and transom were incorporated into the hull with a single pointlift for ease of lifting. Additional in house stainless steelwork included keel bands, folding roof mast gantry and rails all round to MCA specification.

Sean Strevens, Cheetah designer said 'This is the first time we have built two boats with the same specification out of a total of 330 delivered. We are close to further orders from Eastern Europe where both oil and natural gas exports will hopefully provide the finance to modernise their survey vessels.' 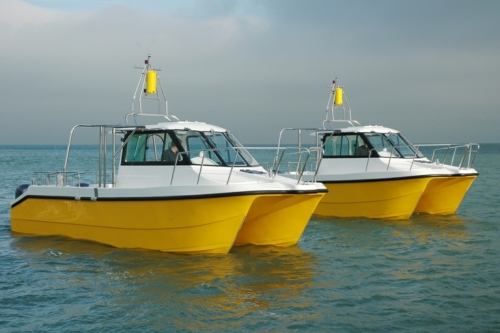