This Cats got the Dream

Following a good sea run to Jersey back in May for theJersey Boatshow, 7.9m Lilly Mae has finally arrived at her new home just acouple of miles from Ireland’s most westerly point. The 7.9m Cheetah is mooredin peaceful Brandon Bay surrounded by the Slieve Mish Mountains and overlookedby an idyllic pub on the small quay. Sounds perfect? and to top the stunningscenery is some of the best sea fishing and cruising grounds in Ireland.

Cruising north from Lilly Mae’s new mooring and just a mileround Brandon Point is straight into deep water Atlantic Ocean. When relief isneeded from the monstrous swell, the 4km Maharee Peninsular creates a largesheltered bay home to an abundance of birdlife and offering sanctuary todolphins and seals. The 7.9m hull design is ideal for handling the Atlanticswell and with the security of not being caught out in unexpected conditions, new owner Jim and his family can explore the many tidal bays on the west coast.With a shallow draught of less than 30cm, Lilly Mae is perfect for fishing inclose around rocks or nosing up onto remote beaches.

The 7.9m has been supplied with a triple axle, aluminiumtrailer, manufactured at the Cheetah workshops. Cheetah Marine started buildingbespoke trailers in 2009 to suit each catamaran as ordered. The trailer weighs760kg and is capable of carrying a max combined weight of 3500kg with asuitable towing vehicle. Jim has the flexibility of launch and recovery fromvarious slipways and can tow to launch sites further up the coast as well asinland waterways. The ease of launch and recovery using the central guides onthe trailer enables many Cheetah owners to avoid expensive mooring fees.

After following the progress of the Cheetah design over theyears, Jim was fully persuaded after taking a run out on Cheetah’s former8.5m demo boat from Ventnor Haven. Jim was initially impressed by the Cheetah’ssoft ride with ability to handle rough seas and placed an order soon after.

Internal: The long style wheelhouse has been kept simplewith helm and navigator’s suspension seats with additional two bench seatsbehind with storage under. Forward of the dash is additional storage space. Jimwill be fitting his full Simrad electronics package from his old boat.

Deck: Again, a simple configuration keeps the deck clear,maximizing the fishing area. Two storage boxes have been fitted aft of thewheelhouse which double as a step down onto the cockpit. A small sink withwater supply has been fitted at the back of the wheelhouse. A full set ofstainless steel safety rails have been fitted to the bow, wheelhouse roof andthe cockpit with a fold down roof mast gantry when towing. 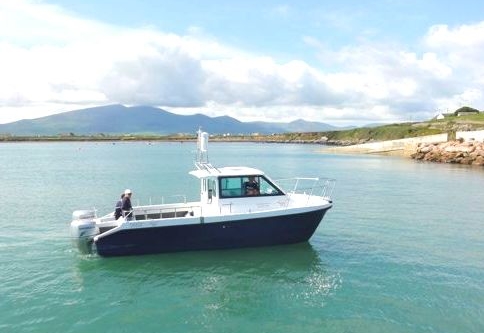