This weekend Lucy and Sean delivered an 11.2m Water Taxi to Amsterdam. The 11.2m will continue her voyage to Freetown, Sierra Leone by ship and is due to start service at the beginning of November.

‘We had three great days heading round to Ramsgate and then across the North Sea to the Imouden Canal’ said Sean ‘After overnighting at Ramsgate we headed north across the outer Thames to refuel on the River Orwell where we had the opportunity to show the 11.2m to some potential customers. We encountered some nasty steep seas as an Easterly force 5 was blowing across the North Sea. Our final stretch which was 130 miles north east to the start of the NordZee Canal. We made good time with cruising speeds of 28 knots and fuel consumption at 3.6 litres per mile.’

The 11.2m Cheetah is the first of two Cheetahs destined for Sierra Leone. She will be joined shortly by 8.5m ‘Free Spirit V’ which has been the Cheetah demoboat since 2010.

Once in Sierra Leone, the 11.2m will be transferring groups of 15 between Lungi International Airport and the capital of Freetown which is a 15 mile stretch across the Estuary. The 11.2m has a good carrying capacity and has been fitted out with 11 KAB suspension seats in the large wheelhouse and 10 seats in the cockpit. To keep guests cool in the sweltering 35 degree average temperature, an air con unit has been housed on the flybridge which is powered by a 2Kva Honda generator. A comprehensive electronics package includes the Garmin GPS Map 4000/5000 and GMRHD Radome.

‘We fit radar fairly frequently to the larger Cheetahs. It was invaluable in the North Sea as we encountered some very rough weather whilst crossing the world’s busiest shipping lanes. To know the course of each of the ships in our proximity was paramount and also enabled us to keep to the most direct course. It was a great comfort’

With Cheetahs now in all corners of the globe from Hong Kong to Bermuda, Gabon to Germany, it is fast becoming a worldwide species. Where next? – who knows then the phone rings. 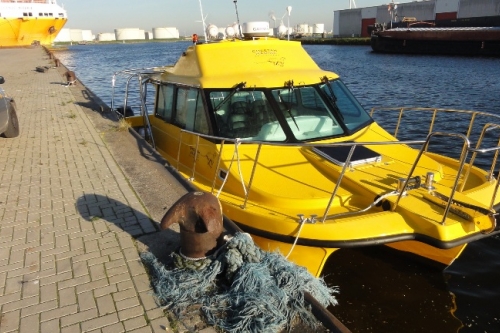