Survey: Cheetah up the Congo

The 11.2m series is soon to celebrate its 10 year anniversary and in the time has been well tested by almost every type of user. The latest 11.2m to be launched from the factory is heading out to Africa to act as a survey vessel for a Democratic Republic of Congo based dredging firm, Dredging International.

One of the key features of the vessel is Cheetah’s patented Hydropod system enabling easy deployment of a variety of MBES transducer heads including the Reson 7125 and 8125. The moon pool which measures 650mm x 650mm is fitted with a blanking plate enabling high speed transit between survey sites. The system, tested by Reson engineers, confirm that high accuracy of the fixing position ensures that the system does not require recalibration between survey sites. This moonpool system allows mulitbeam sonars and forward facing sonars to be deployed accurately beneath the boat and then retrieved to the deck of the boat with ease and efficiency. The boat and equipment can be operated fully by minimal crew utilizing the electric winch system fitted to the sonar rig. This whole package twinned with the Cheetah’s shallow draught of 0.5m allows complex surveys to be carried out in shallow water zones including river and estuarine systems, harbours and deep water.

The 11.2m series has a 3.7m beam which gives the vessel a 3.6m wide deck space. Philo has a full width dash forward of the helm which is utilized with four display screens and readout devices, giving the user real time data whilst still allowing them to control the vessel.

Philo is fitted with two Yamaha 350hp petrol outboards producing top speeds above 35 knots and a cruising speed of 20 knots. Twin 350 litre inbuilt fuel tanks give it plenty of range.

In the cabin, a stainless steel, rubber mounted computer rack has been fitted to take up to 4 screens measuring 1200mm x 900mm. 240 volt power sockets have been fitted through the cabin in locations specified by the customer. General facilities include; a galley with sink and electric tap and a Jabsco electric marine toilet in the port hull. A starboard side double berth forward of the helm provides Philo the ability to carry out longer period surveys.

Cheetahs entire range of boats from the 6.2m series up to the 11.2m series is available to be built to survey specification. All of Cheetah Marine’s builds are custom built to specific requirements. 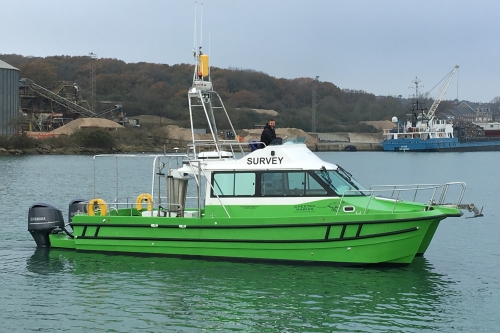