Visitors at Seawork 15 will be able to see two of Cheetah's larger series of catamarans on the pontoons this year. Both, vessels demonstrate the large work area available on a safe and stable work platform, underlining the earning capacity of the Cheetah Catamaran.

Seawork International is the largest and fastest growing international commercial marine and workboat exhibition held in a European working port. The show boasts attendance of over 7000 high calibre visitors from over 53 countries and is held each year in the Canary Island Fruit Terminal, Southampton.

LOA 11.2m x 3.7m Cheetah has been designed and built for commercial fishing and suits any applications where maximum deck space is a priority. The catamaran features a short 1.2m, full width style wheelhouse, maximizing outside deck space to over 24m2. This series is available from 9.2 to 11.2m.

Amidst a string of new builds this year the10m series  has been well received in both the workboat and recreational market.

LOA 9.95m x 3.6m Cheetah. Cheetah 2 features back to back seating, an open style wheelhouse with extended overhang for added deck protection and is MCA coded for 12 passengers and 3 crew. Cheetah 2 was exhibited at Oceanology in April where she previewed WASSP’S next generation MBES. The WMB 3250 multi-beam sonar is ideally suited to coastal surveys and environmental mapping and has become acknowledged as one of the most cost effective systems on the market. This series is available from 8.5 to 9.95m.

Both vessels have been built for specific workboat purposes demonstrating Cheetah’s approach to specialized one off builds.

Cheetah Marine currently have a full order book with future builds secured for both the home market and abroad. Further developments of the popular 10m series is a fully containerised model which is currently in production.

For more details on Seawork 2015 visit: 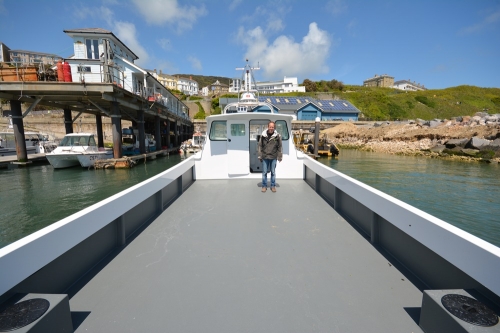