At the start of the year Sean had the opportunity to test Selva’s new continuously rated outboards on the 9m x 3.6m Cheetah Catamaran. Fuel economy verse engine power has become one of the leading areas in outboard development and is a critical factor in optimizing Cheetah’s efficient hull design.

“We recently installed and tested a pair of the new Selva Tarpon 40HP engines on Cheetah’s demonstrator. The standard engine revs to 5500rpm with a maximum 115hp. These are 1741cc engines weighing 189kg each and are ideally suited to our 9m x 3.6m and 9.95m x 3.6m range. The 40hp version is the lowest RPM engine in Selva’s continuously rated range. The engines performed perfectly, cruising at 18 knots at a maximum of 4000rpm using 30 litres per hour for both engines. The fishing licence required is only 59.68Kw and 2.3/ 2.5 tons.”

The trial used NMEA technology providing accurate data for vessel fuel consumption at 1.6 litres per mile at 18 knots. Optimum economy for cruising speeds is generally at around 50 – 75% of an outboards maximum capacity. On a Cheetah this is from 3000-4500rpm and is remarkably good consumption for the speeds acquired.

Other engines available in the range include 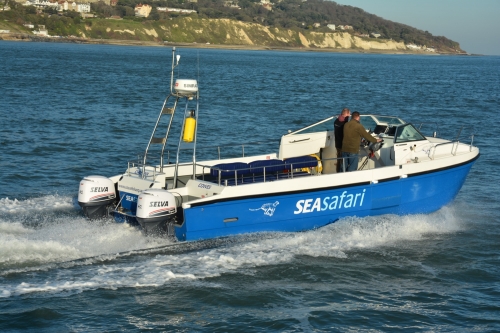