Pride N Joy is the latest Cheetah Catamaran built by Isle of Wight Boatbuilders Cheetah Marine. After arriving safely to Kip Marina in Inverkip on the west coast of Scotland by road, a swift crossing to Tarbert Harbour completed the passage to the Cheetah’s new base.

As with all Cheetahs, the 9.95m Cheetah has been designed and built to extremely high commercial standards and is destined for a life working in and around the Firth of Clyde. Although predominantly diving for scallops, razor and otter shells, new owner Hector Stewart will also be using creels.

For years I have been watching the Cheetah Catamarans progress, and have always been keen to get one for their deck space and good stability. Thanks to everyone involved she is the boat I have always wanted. The range with the new boat will enable us to work the whole of the Firth including the coastlines of Arran and Sanda. We plan to cover up to 50 miles in one day and return the next instead of the 20 mile range which we covered previously.

The Cheetah measured 9.95m overall with a beam of 3.6m. During sea trails she reached max speeds of 29knots. Average fuel consumption whilst cruising was calculated at 1 litre per mile per engine. The standard commercial wheelhouse features helm suspension seating and additional seating on the starboard side. A large dash provides more than adequate space for charts and the mounting of electronics, to be completed by Stewart. Forward of the dash has been fitted out with bunks and cushions enabling easy overnighting for the skipper and 2 crew during extended fishing trips.

The Stewarts opted for the new walkaround style foredeck. This style was designed for a customer in Bermuda who wanted to be able to fish from the bow and has recently proved popular within the commercial fishing and charter sectors. The walkaround features a deep trough walkway enabling easy access to the bow and anchor locker. Rails and other metalwork will be completed in Scotland.

Port side of the wheelhouse is a 13hp Honda powerpack housed in a separate storage compartment accessible from the deck. The hydraulic powerpack powers a ¾ Tonne P bracket hauler. The complete package was supplied by Spencer Carter and installed by Cheetah Marine.

With a large, clear deck measuring over 18m2, Stewart will be able to take advantage of the excellent weight carrying capabilities of a Cheetah whilst maintaining good cruising speeds.

The 9.95m has proved a popular model for commercial fishing. The first of the 9.95m was designed for a fellow fisherman from the Island who use to work his 9.95m from the surf beach at Ventnor. In the first four years the engines clocked up 8000 hours, given the boats superb sea handling and the owners love for fishing. The 9.95m has demonstrated it is a tough commercial machine time and time again. 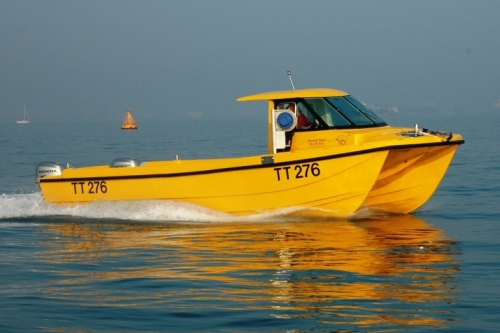