Scottish Fisherman creels his way through the Cheetah series

Fisherman of nearly 40 years and Cheetah owner of ten years, Robert Wallace has worked his way through the Cheetah series starting with Piscatio - a part build 6.9m back in 2004. Robert now awaits delivery of his forth Piscatio, a 9.4m x 3.6m currently in the final stages of fit out in the Cheetah workshop.

Robert is based in the Moray Firth and is also a pelagic fisherman. His succession of Cheetah Catamarans have been used forc reeling and mackerel hand lining in between the offshore pelagic seasons.Since ordering the original 6.9m ‘Piscatio’ back in 2004, Robert has upgraded through the 6.9m, 7.9m and the 8.5m series, completing each fit out, working the Cheetah and then selling on to buy the next size range

Robert comments ‘The Cheetahs are great boats and fishing has become increasingly economical as the boats can work more gear in harsher conditions. Fuel consumption is one of the big plus points when owning a Cheetah,the hulls really are fuel efficient, whilst providing a very stable and safe working area. I started working strings of 10 creels with the 6.9m and plan to work up to 30 with the new 9m.’

The new Piscatio is Cheetah Marine’s popular 3.6m beam catamaran which can be built at any length from 8.5mto 9.95m. Robert specified a length of 9.4m and has ordered a completed vessel,ready for launch and sea trials. To ensure maximum strength,Cheetah hulls are always moulded in one piece with internal bulkheads fitted at600mm centres throughout. The length is changed by introducing a transom insert into the mould before laying up.

‘Another advantage of a Cheetah is the speed in which it travels. If I am out at sea and the weather changes for the worse I can get back to shore very quickly.’

The hull is finished in Piscatio’s signature turquoise with white topsides. The new wider wheelhouse designed in 2012 has been partitioned to create an offset cab on the central and port side. The starboard side hauling position is protected by the full width screen with easy access to the throttles.

Cheetah Marine fabricate and fit all stainless steel, bespoke to each catamaran. Piscatio features chine bands and keel bands to protect the hulls when hauling gear and fishing in shallow waters. The stern features an inbuilt shoot with compartments for the hauler box and fuel storage. A 13hp Spencer Carter hydraulic powerpack is fitted to Seafish standards.

‘I didn't buy the boats with the view of upgrading but on seeing the good resale value of the Cheetahs I was tempted to try and sell the first 6.9m. I had no problem selling and could have sold it a few times over. I also had the same experience with the 7.9m. Cheetahs are great boats built by a good company with an excellent reputation for building first class vessels.’

Cheetah Designer SeanStrevens comments ‘The 9m series is now one of the most commercially tested boats available in the under 10m fishing market. As fishing techniques and government legislation has evolved we have made subtle design modifications to further improve the efficiency and economy of the 9m series.’

The new Piscatio is due for launch early November. Launch photos will be posted shortly.

A similar 9.95m surfing in through the Haven: 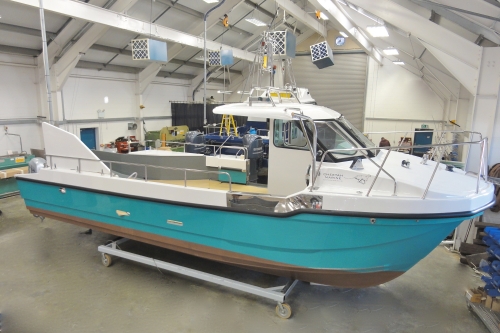