Orca is out to play

Remember the first containerised Cheetah? Here she is playing in the west coast waves with her namesake at Cape Sao Vicente on the south west tip of Portugal.

Wildlife Tour Operator ‘Seaxplorer’ named Orca after their favourite cetacean which is spotted on their two hour trips from Sagres in the West Algarve. The team has a very high success rate with sitings of common and bottlenose dolphins above 98% and an impressive whale line up throughout the spring migrations. Trips generally last 2 hours with a fair amount of steaming before spending time with the dolphins, hence economic cruising speeds are essential.

The containerised Cheetah has evolved from Cheetah’s 11.2m series which is considered amongst owners to be groundbreaking in terms of stability and comfort. In the words of the Seaxplorer team a ‘super smooth & comfy ride’. The 11.2m has huge power delivered by 2 x 200hp OXE diesel outboard engines and a tunnel design to produce superior cushioning in even the most uncomfortable sea conditions. With a huge deck Orca had been coded under Portuguese Maritime Turismo for 18 passengers +2 crew.

Seaxplorer have been operating since 2014 and report their comprehensive list of sitings to the National Park. Information about each species as well as known individuals is relayed to customers in three languages by onboard Marine Biologist Michele. As well as delivering an unforgettable experience, Seaxplorer are dedicated to understanding these beautiful creatures in a way that will help to promote and safeguard their future in the oceans. 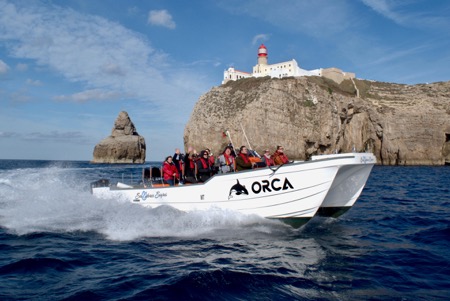