The BGS criteria required a stable, transportable system capable of being moved around the country and launched and recovered from a variety of coastal and inland sites. The 7.9m Cheetah Catamaran was seen as a proven product for small workboats and in particular Cheetah Marine’s flexible approach to designing systems for the hydrographic survey sector.

With a fully integrated moonpool and MBES systems ‘White Ribbon’ weighs in total 3000kg. Cheetah Marine wanted to provide a new concept transportation system which wouldn’t restrict the client to the legal 3500kg for combined trailer and vessel weight. The new system provides greater flexibility with onboard weight, enables self launch, recovery and road towing whilst avoiding expensive haulage fees.

Using a hook loader lorry and an adapted flatbed, the vessel can be lifted from the water onto the back of the truck using the hook lift mechanism. As the flatbed is only 250mm deep, the 7.9m with its shallow draught will float onto the flatbed easily and is winched into position using an electric winch on the headboard of the flatbed. The design of the flatbed incorporates Cheetah Marine’s trailer guide system, accurately guiding the boat onto the flatbed under its own power or being winched.

Cheetah Marine’s unique hydropod installation featuring a between hulls moonpool has been accommodated on the aft deck. Twin Kongsberg EM3002 Multibeam Echosounders are positioned at 45 degree angles pointing forward and aft on a stainless steel rotating disc system. When lowered through the moonpool, the bearing is rotated facing the transducers port and starboard. This rotating system enables larger transducers which are too large to fit between the hulls to be deployed on a smaller catamaran. The whole system is suspended from an overhead stainless steel gantry, designed and manufactured at Cheetahs new workshops at Ventnor Haven on the Isle of Wight.

With a top speed of 25 knots ‘White Ribbon’ can quickly access transit sites with the hydropod lifted above the deck. The simple lowering procedure combined with extreme accuracy removing the requirement for calibration enables surveying to be commenced in a time efficient manner. 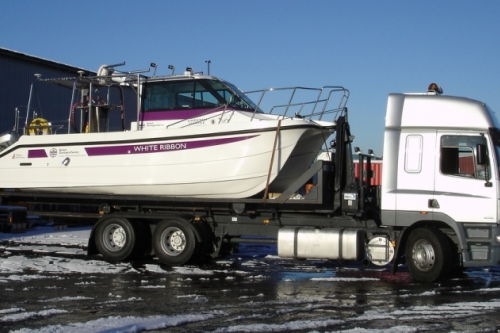