Cheetah VI, inspired by the sportsfishing sector is the first Cheetah to feature an open central helm console offering flexibility for fishing from all areas around the boat.

The latest addition to the Cheetah series has been presented by Franck Vidal of FX Marine, agent for Cheetah France & Spain, alongside Franck’s own 11.2m XCAT.

The remainders of a hurricane, causing the organisers to close the show for the first day produced some interesting sea conditions for testing in the ensuing days.

Sean Strevens, Cheetah Designer, ‘with exposure to the Atlantic, variable force 6 winds and a short, breaking sea, we had perfect conditions to demonstrate the Cheetah’s performance in rough weather. ’

Fortunately, for visitor numbers, although at the expense of good testing conditions the fairweather returned for the weekend.

HULL AND FIT OUT

The new 6.9m series, released in the UK earlier this year has already been built with various accomodation options including short wheelhouse, windscreen and central console. A longer cabin model is also available. With a width of 2.55m, the spacious deck provides excellent stability when underway and whilst drifting or at anchor. A shallow draft of 30cm and stainless steel bands protect the hulls when fishing around rocks and whilst sitting level on the beach.

The entire Cheetah series is renound for excellent capabilities in both head and following seas whilst maintaining very economical cruising speeds. The 6.9m is no exception and with high volume hulls, larger engines running at lower rpm maximise engine life.

Cheetah VI has been reviewed by various journalists and will feature in a range of French boating magazines over the coming month. For more information contact Franck Vidal: fvidal.fxmarine@gmail.com 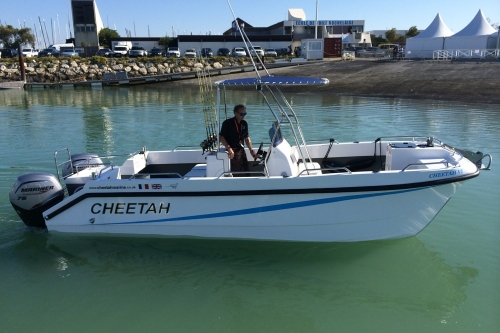