A new 6.2m Cheetah Catamaran has joined the growing fleet of Cheetah Catamarans fishing from the south side of the Isle of Wight. 6.2m ‘Monks Bay’ is one of the first Cheetahs to be completed at the new Cheetah Marine Headquarters at Ventnor Haven and had a short delivery of just 1 mile to her new home at Bonchurch.

‘Monks Bay’is owned by father and son team Dave and Andy Scovell and replaces ‘Blue Tinny’ which Dave, now 70 worked from the beach for over 20 of his 45 years fishing. The ability to beach launch was again, a top priority for the new larger boat which needed space for two, following Andy’s retirement from the army.

With a large spacious deck of 28m2 and a side door, ‘Monk’s Bay’ doubles up as a dive boat enabling Andy to explore the wrecks, diggers and barges all lost less than a mile from where they launch. Stability, again a high priority was essential to the coastline where the Scovells work

We get some real steep, hollow seas in strong tides between our launch site and our strings,

Monks Bay is fitted with a single 40hp Honda giving cruising speeds of 15 knots. A Spencer Carter 8hp powerpack is fitted on the port side. A standard stainless steel davit is fitted on the starboard side with windscreen rails and low bow rails to enable easy beach handling.

In the early days of Cheetah Catamarans, Dave used to assist with the launch and sea trialling from Monks Bay where he lives and fishes. Dave who was also involved with the build on 6.2m ‘Monks Bay’ comments ‘I helped with all stages of construction of ‘Monks Bay’ in the Cheetah workshop. The lay up and construction materials have advanced incredibly since the early days of the plywood Cheetah back in the late 80s. We will now be reaping the benefits from the extremely lightweight and strong technologically advanced materials on offer today. Keeping ‘Monks Bay’ light and maneuverable is vital for easy launch and recovery from our beach which involves steep shingle banks and sometimes a foot or so deep of seaweed’

Dave and Andy chose the screen style set up, again keeping weight to a minimum and ensuring maximum ease of handling when maneuvering the 6.2m both on the beach and in the water.

A specially designed beach trailer constructed of galvanized steel is used in conjunction with the Scovell’s tractor. The trailer is low to the ground and has a low launch and retrieval angle which means that the 6.2m Cheetah can be launched and recovered in very shallow water. This means that you can get the boat closer to the beach out of larger seas.

it was a good project for us. As well as being close to home, ‘Monks Bay’ is based on the original principles of beach launching which we have been developing for 20 years. The efficiency and ability of this under 7m boat is extremely good. 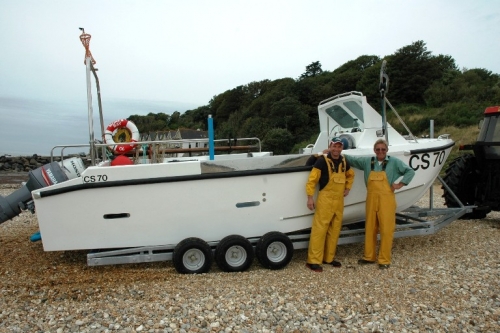