Lets get this show on the road

The end of another hugely successful Southampton Boatshow and Cheetah Marine would like to thank all of you that ventured aboard our fine array of Cheetahs on exhibition this year. We welcomed over 150 interested parties, and true to Cheetah style some exciting requisites; American style sportsfishing, open water taxi, dive and remote location operations are to name but a few.

With the exception of our extravagant neighbours of the sunseeker fraternity WhiteCheetah, Vivien B and Wetwheels were amongst the busiest boats at the show.

This week Sean and Lucy are in LaRochelle Boat Show with a new type 6.2m where they will be accompanied by 9.2m Noden which was delivered to Royan earlier this summer.This is Cheetahs first show in France and considerable interest has already been generated by Noden both on her journey via Guernsey and the west coast of France and in Royan itself. We eagerly await to see how the Grand Pavois Boat Show receives the duo of Cheetahs.

We would like to congratulate Wetwheels Jersey on the successful commissioning of their new 9.2m during the Southampton Boatshow. A mighty inspiration for communities allover with the project conceived, funds raised, Cheetah ordered, built and collected in just over a year. More details to follow 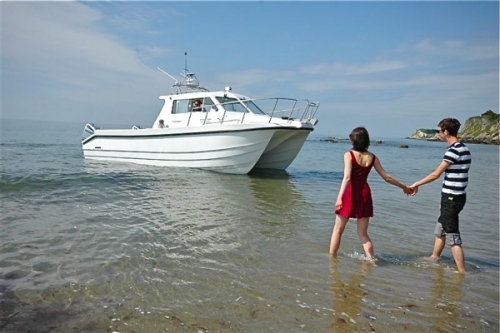