‘Friends of Dolphin’ take delivery of their second Cheetah

10.2m 'Dolphin III' built for ‘Friends of Dolphin,’ a charitable trust based in Poole has been specially designed and built to take passengers of all ages and disabilities.

Back in 2001, Cheetah Marine were approached by the Friends of Dolphin a non profit making charitable organisation based in Poole. The aim of the Charity is to give free trips to disabled persons of all ages and disabilities who, due to the lack of suitable facilities, are unable to use the normal pleasure craft operating in Poole Harbour. ‘Dolphin III’ was the third boat since 1975 to be purchased by the organisation – a 9.95m Cheetah. After 6 successful years in service the Friends of the Dolphin again approached Cheetah Marine to build a larger, updated model.

With a beam of 3.7m and deeper, high volume symmetrical planing hulls the new model is considerably larger than the 9.95m. The hull is available at a choice of lengths from 9.95m up to 11.2m depending on the customer’s requirement.

"The new Dolphin III was placed in service on the 27th May 2008. In the first season 1395 disabled passengers and their helpers enjoyed free trips around Poole harbour.All our regular passengers are delighted with the new, larger boat which has better seating and improved awning facilities. A combination of the new Honda 135 outboard motors and bow thrusters have proved their worth when berthing in an increasingly busy Poole Boat Haven. Overall fuel consumption has been 8.7 litres per hour, as opposed to 8.6 litres per hour for the Honda 90’s bearing in mind our usual cruising speed is between 6 and 8 knots."

The new ‘Dolphin III’ has been specially designed and built to take passengers of all ages and disabilities, in particular those that are less mobile and in wheelchairs. The wide spacious deck provides excellent stability in even the roughest sea conditions with a safe and comfortable ride as standard. Wheelchair access is via one of two inward opening doors at deck level on both port and starboard side. On the outside deck, a large overhead canopy offers protection from the elements without hindering the view or experience from the deck. Passenger seating for 12 runs up both the starboard and port gunwales with storage under and there are wheelchair anchoring locations embedded into the deck. {quote_1}

‘Dolphin III’ Crew chose the medium length wheelhouse with a separate wheelchair accessible toilet compartment accessed from the aft deck. Inside the main wheelhouse is a starboard side galley featuring cooker, sink and kettle behind the helm suspension seat with additional bench seating on the starboard side. The wide dash has been fitted out with various electronics including the Garmin 550S and Sailor VHF.

As a requirement of the Friends of Dolphin crew who are all elderly volunteers, Cheetah have removed a section from the central dash to allow easy access forward where a large hatch provides access onto the foredeck and anchor locker located into the bow. Back inside, two small staircases lead down into the port and starboard hulls where two Sidepower Bowthrusters have been fitted into both hulls to enable easy docking. Cheetah Marine has fabricated a complete set of stainless steel safety rails, both on deck and around the bow. 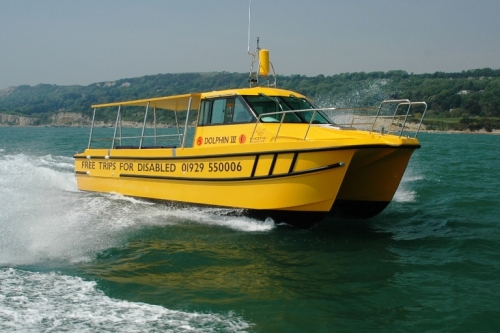