Round Island, a small Island in Poole Harbour is home to the latest 8.5m Cheetah ‘Arrapay II’. The 8.5m will replace two vessels, a 6.9m Cheetah and a larger Lochin which have serviced the privately owned holiday isle for the past few years.

‘Arrapay II’ has been named after an infamous smuggler reputed to have lived on the island. With swashbuckling smugglers well in the past, at least within the confines of Poole Harbour, the namesake Cheetah will serve a more practical and positive purpose including transferring guests and supplies between Poole and the holiday island.

Sean first delivered a 6.9m to Round Island in 2008. After three years of successful service, Owner Colin Palmer decided to upgrade and replace both the 6.9m Cheetah and the Lochin with one boat which could fit all purposes. Being thoroughly impressed by the 6.9m he decided to opt for the larger 8.5m Cheetah with a 3m beam. With a draught of 35cm the skipper can run passages between the island and mainland at almost all states of tide, giving not only greater flexibility for guests but peace of mind.

The current 6.9m will not be travelling far to her new home – just a few hundred yards to the neighbouring ‘Long Island’ where the new owner can again take advantage of her shallow draught and good weight carrying capability.

Round Island and 'Arrapay II' Owner, Colin Palmer kept the specification very similar to the original 6.9m Cheetah as the design had worked so well on the smaller model. This included a side door fitted aft on the port side, fold down deck seating enabling guests to enjoy their cruise outside and a large spacious cabin with the benefits of the extra beam which the 8.5m offers. Additional protection to the hulls and to enable beaching on courser shingles is provided by stainless steel keel bands which are bonded to the keel.
Complying with the, RCD, ‘Arrapay II’ has been CE coded to Category C with the license to carry up to 12 passengers and their luggage.
Current boats in build include an 11.2m Cheetah which will be again used to transport passengers and supplies to an area in remote Scotland not accessible by road. ‘Carnach’ will be delivered by sea to her new home at Knoydart on the west coast before the end of July. Watch the website for more details. 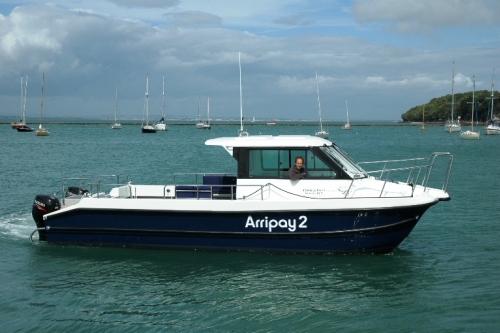