Hamble Harbour take deliver of the first of twin Cheetahs

Cheetah Marine has delivered the first of two new 6.9m Cheetah Harbour Patrol vessels to the Harbour Office at Warsash on the river Hamble. These two boats will replace the high milage Cheetahs supplied to Warsash some twelve years ago. At that time Cheetah designed a low windage wheelhouse for the Hamble Harbour Master and this design was chosen for the replacement vessels. With 7 miles of river frontage and a total of 3,500 boats to cater for, the patrol boats and their skippers put in a considerable number of hours on the water.

When the time came to replace the existing boats, Cheetah Marine was the obvious choice. We have been totally satisfied with both the boats and the customer service over the past years. We are very much looking forward to working with the new Cheetahs in 2011.

The stability of the Cheetahs is ideal for the regular daily patrols carried out along the length of the Hamble River. Patrolling officers monitor any potential environmental and safety problems, remove debris from the river and deal with all the incidents involving accidents and collisions. The Cheetahs are fully equipped for towing disabled vessels, not an uncommon occurrence. The inspection of moorings and maintenance of lights and buoys means that the considerable deck space is often in use.

Both boats will be powered by twin 60HP Honda outboard engines. The new Honda 60Hp is very fuel efficient and has an increased steering angle to that of standard outboards. With twin engines and a 50 degree steering angle to both port and starboard this 6.9m Cheetah has incredible manoeuvrability. The performance of the 6.9m is ample for the enforcement of bylaws including speeding and important for the role of assisting HM Coastguard in search and rescue operations.

Hydrive hydraulic steering is supplied by Southern Cross with two steering positions, the second position outside the wheelhouse for ease of working. A side door gives easy access for boarding other vessels. Much of the equipment fitted will be changed over from the older Cheetahs.

Double fendering is fitted with a deep foam filled collar making coming alongside yachts a simple proposition. A Premier Hazard Blue Lighting bar with searchlight, VHF inside and out with a loud hailer facility completes these custom built patrol boats.

The Cheetah order book is very healthy and a new model 9m and an 8.5m arrived by sea in Belgium in the last few days. 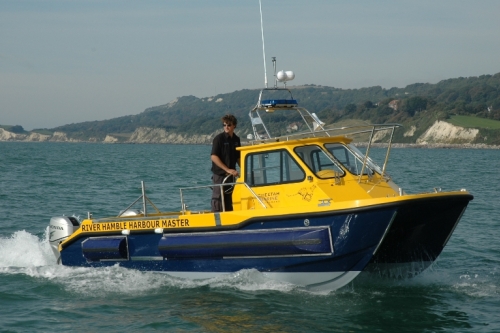