Easter this year, saw the longest Cheetah delivery by sea. The 800 mile journey to the German Polish Border took five days, four overnight stops in different countries and a trip through the Kiel Canal. This was the final outcome of an enquiry from Eddy Stoll, a German Hotelier and fisherman back in 2009.

In addition to Eddy and Cheetah Designer Sean Strevens who are both seasoned sailors, two of Eddy's less sea faring friends Herbert and Joe joined the delivery crew. Eddy, Jo and Herbert were all members of the Skal club and welcomed the idea of an International Skal Tour in combination with the delivery.

The team left just before sunrise on the 20th April, catching the flood tide round to Dover before overnighting at Blaukenberge on the Belgium Dutch border. The first leg of 180 nautical miles took 10 hours and Carmen Calypso consumed 336 litres of fuel.

The first part of the journey took us along the South English coast in 10 hours, to Dover. From there we sailed towards France on the English Channel, the world's busiest sea lane. Never in my life have I experienced a sunrise as beautiful as the one I witnessed while on the water. We all took photographs as a wager to see who had the best one. In broad daylight, it was off to the harbour of Blankenberge in Belgium to ensure we were stocked with enough supplies to prevent dehydration and scurvy, mostly consisting of Belgium beer. Herbert Hoffman, 'Carmen Calypso's' soon to be seasoned crew

Day 2 Blaukenberge, Belgium to Harlingen, Netherlands
Sea conditions were favourable the following morning as ‘Carmen Calypso’ cruised north through the North Sea to the next stop 165 nautical miles north east to Harlingen on the West Frisian Islands, Zie de Zee. ‘Carmen Calypso’ was admired by the locals and the group enjoyed a tour of the beautiful town.

Day 3 Harlingen, Netherlands to Rensburge, Germany
On day three from Harlingen ‘Carmen Calypso’ left the North Sea and the Netherlands and entered the German built Kiel Canal . Although, ship movements are restricted to 8 knots and limited to daylight hours, the crew achieved their best distance run of 220 nautical miles before tying up for the night at the yacht harbor of Rensburge, half way along the 100km inland canal.

Day 4 Rensburge to Rostock, Germany
By the time the crew had reached the Baltic the following morning, a strong north easterly force 6-7 wind had picked up creating rough seas. ‘Carmen Calypso’ was in her element, taking the rough weather in her stride like a seasoned sailor. Eddy was enjoying the pleasure of experiencing his new Cheetah in the type of conditions she was originally designed for, whilst Joe and Hubert who were new to boating were a little nervous at the flighty conditions of the sea but all the more impressed by the safety afforded aboard ‘Carmen Calypso’.

Up until the Baltic, our journey felt more like a cruising holiday, but here we quickly experienced the force of Mother Nature. The two engines had to battle their way through the roaring Baltic Sea in wind force 6-7. Waves up to 3 meters had our sailor mates Eddy Stoll and Sean Strevens shouting for joy. Meanwhile Joe Hickson and I were clinging on to our seats, trying not to get seasick -it worked surprisingly well, leaving the professionals in awe. Herbert

After heading north east, around Fehmarn Island, ‘Carmen’ Crew altered course to the south east to overnight at the port of Rostock.
Sean commented ‘We maintained 15 to 16 knots into a head sea and the boat performed perfectly, the cushion effect in the tunnel produced a very soft ride considering the sea state.’

On Easter Sunday, we continued our voyage in the rugged Baltic Sea. In the meantime Joe Hickson and I had become semi-seasoned professionals. At the swell, we managed to snap some great shots of the chalk cliffs on RÃ¼gen from Germany's most northern point. After a final pit stop in SaÎ²nitz, the silhouette of our desired destination, the beautiful Kaiserbad Bansin, loomed on the horizon. Herbert continues

The crew arrived at their destination on the afternoon of Easter Sunday. Joe and Hubert disembarked at the beach outside Eddy’s hotel whilst Eddy and Sean continued east to the nearby Polish port of Swinoujscie. The journey totaled 765 miles from Ventnor on the Isle of Wight to Swinoujscie on the German border. In total the 10.2m Cheetah used 1486 litres of fuel which works out at an average fuel consumption of 1.94 litres to the nautical mile. The average speed taking into account the 8 knot restriction on the Kiel Canal was 16 knots.

The Yanmar BY150 engines and Bravo II Stern Drives ran perfectly throughout the voyage. The drive showers kept the Barovo IIâ€™s cool. The engines are both quiet and vibration free. Barrus have given us great service and support throughout the project. We will be happy to fit the BY Series Yanmar in the future. Sean comments on the new Yanmar and Bravo engine configuration

Eddy’s comments
‘I had been looking at websites in Australia, Finland and UK to search for catamarans. The Cheetah Marine website had some good movie images which were very impressive. On visiting the workshops for the first time in 2009 What I realized immediately was the quality of the hull and the opportunity to fine tune the specification to suit my own needs, especially bearing in mind the occasional need to beach the boat. I love the balance of the boat, the wonderful power to weight ratio which allows me great flexibility, good ergonomics and speed. I also have the option of fishing or taking tourists out into the Baltic for Leisure trips or even combining the two.
The journey from IOW to Bansin confirmed all of my expectations of the boat – good speed – great balance – layout of operations – light – clean and tidy – great lines and a wonderful reaction to the choppy Baltic Sea.
I will be catching eels, flounder and pike using long lines in the Summer and nets in the Wintertime. I am now able to arrive at the mark where the eels are in one hour rather than the two it took my old boat. So now I can fish for longer or be home an hour earlier = win/win!’ 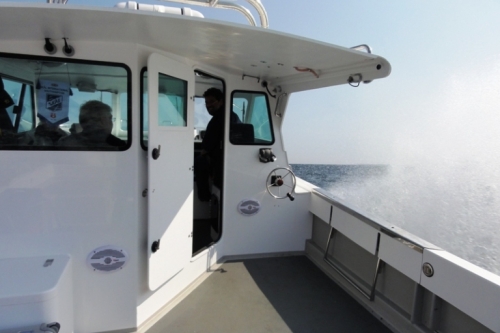