For some while, Briggs Marine, who own and maintain the fleet of boats operated bythe Environment Agency have been considering how best to replace the aging small RIBs currently in use. Taking into consideration that the Environment Agency are already using three different Cheetahs around the UK for various projects, the 6.2m Cheetah was an obvious choice if an improvement could be made.

Initially Briggs Marine have selected a Cheetah 6.2m catamaran to replace an aging 5.5m RIB based at their North West region headquarters in Preston. The latest 6.2m design was first launched last year and incorporates some minor improvements to the 6m hull which hasbeen so successful over the past decade. Replacing an open RIB meant that the open wheelhouse version of the 6.2mcould be used to provide the maximum deck space, 2.80m x 2.2m wide, whilst still giving much more protection against the elements than the RIB.

'ThreeRivers' will be used for water sampling and fisheries patrol.

Twin Honda 60hp engines were chosen to give excellent performance with the good fuel economy and reliability enjoyed by the three other Cheetahs being used by theEnvironment Agency. As usual Hydrive hydraulic steering from Southern Cross Marine is fitted. Electronics include a Garmin chart plotter,VHF, sounder and radar.

Stainless steel keel bands, rails to MCA specification and a port side swinging davit were all fabricated at the Cheetah yard. 'Three Rivers' is MCA coded to Category 3 with four persons onboard. A Cheetah designed and builtaluminium twin axle trailer will mean that the vessel can be deployed over a large area. Cheetah designer Sean Strevens said 'We have felt for some years that the small catamaran can offer a better work package than the same sized RIB. There is more working deck space available and more shelter from the wind and rain. The ride is soft withexcellent stability which means that the boat can be used almost irrespective of the weather. With 'Three Rivers' we are testing a new foam core, six inch Hyperlon covered fender. This will provide similar boarding and fendering to the RIB'

The Cheetah Marine yard is currently working flat out to deliver several catamarans throughout Springtime. These include a fullyequipped 7.9m Survey vessel due to be launched shortly for sea trials and a 7.9m Harbour Master Boat. 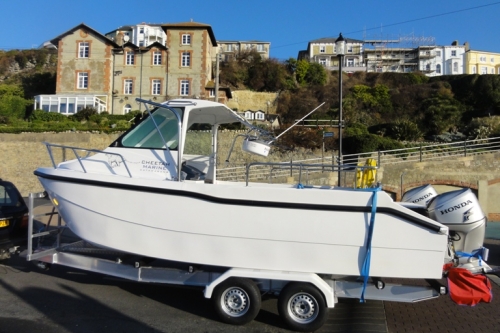