Congratulations to Steve and Natalie Harrison of Aberdaron Seafood who have scooped the Best Overall award for their delicious hand-picked crab fished from the seas surrounding the Llyn peninsula in North Wales. The competition is run by the National Trust and the awards, now in their sixth year include produce grown, reared or made on land owned or managed by the National Trust.

Steve Harrison reports his busiest year ever aboard his 8.5m Cheetah Nathalie H but it has taken sometime to build up the business. Steve took delivery of 8.5m Cheetah in 2007. Both Steve and Natalie were getting increasingly frustrated at how little they were being paid for their crab which was mostly being exported. The couple decided to work towards creating a local market and set up Aberdaron Seafood with business partner Idwal Moore.

Steve works his 8.5m from the small beach at Porth Meudwy, launching daily on a trolley with a tractor. The crab is landed, cooked picked and on a plate within half a day, travelling about 1/4 mile from the beach to Steve’s café ‘The Henblas’. Natalie markets the products and uses local ingredients to cook up some tasty crabby delicacies including crab nachos and welsh potato chips.

‘This has been our busiest year ever and we’re very happy to be chosen as overall winner this year. Winning awards in 2008 and 2009 really made a huge difference to our business. About 70% of our crab is sold within 10 miles of Aberdaron but we also supplying restaurants across Wales and even in London.’

Steve generally fishes a 15 miles radius from the beach, using the shallow draught of the Cheetah to get in tight by the rocks. ‘She is a pleasant boat to work in, much smoother and twice as good in every way as what I had before.’

So what did the judges say about Steve’s legendary crab?

This is heaven, it tastes so fresh from the sea.

Well you cant get much better then that. Well done Steve and team from all of us here at Cheetah Marine. 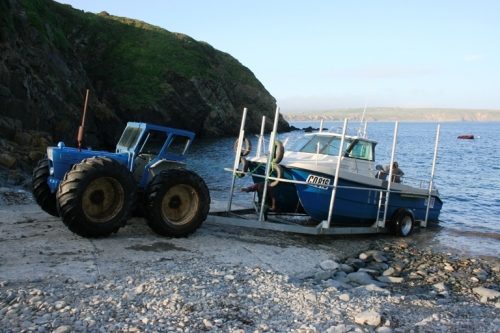