The new 6.2m Cheetah formed the centralshowpiece at the 'Deltavisser' Show in Holland this weekend. The annual show organised by 1600 member plusDutch angling club 'Deltavissers' used the 6.2m as the central stage where club trophies wereawarded and competitions were staged.

As well as gleaming with prizes, the 6.2mattracted a lot of attention from both Dutch and Belgium anglers. Many of whomwill be joining Lucy, Sean and Jan at the upcoming Cheetah Trial weekend atNieuwpoort in Belgium on the 26th and 27th March.

Cheetah Catamarans are now becomingcommonplace, fishing both sides of the Channel with many of our Continentalcousins travelling back towards the British coast in their quest to find thebest angling spots.There are now 9 Cheetahs in Holland and Belgium with applications ranging from angling to leisure and hydrographic survey.

The 6.2m will be staying in Belgium inpreparation for the Cheetah weekend where she will be joined by the new 9m x 3mCheetah, 8.5m Cheetah and a 7.9m Cheetah. Updates on additional models to follow soon. Remember to check out our new video page with a selection of historical and current video clips. 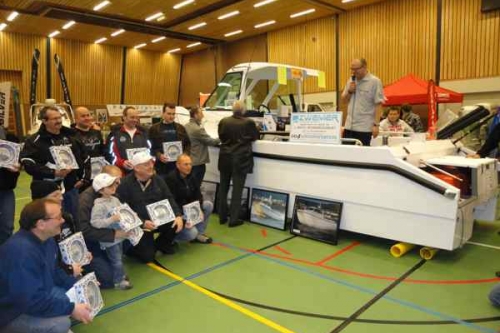