A new 9.2m angling Cheetah has been delivered to Nieuwpoort in Belgium. The marina known as EuroMarina is one of the largest in Europe and is fast becoming a popular residence to a growing fleet of Cheetahs.

Philippe Detru, a keen angler and regular customer at Johan’s Demeulenaere’s angling shop first admired Johan’s new Cheetah at the Nieuwpoort Boatshow in 2013. Phillipe’s present Jeanneau had to be sold but he was determined for the build slot and this did not stop him ordering the 9.2m in 2014.

As well as a sportsfishing boat the new Cheetah is a family affair and has been named Kejo from the names of Philippe’s two children. The catamaran measures 9.2m by 3.7m with a 2.5m long wheelhouse.

Kejo, delivered to Dover in early February by Cheetah Marine was met with considerable interest amongst the Officers at Border Control. Despite the deteriorating sea conditions as the day progressed, new owner Phillipe was set on completing the maiden voyage home and set off from Dover at 15.00.

“There was more wind than expected and further towards the continent the sea was very rough. The Owners had never experienced this seastate before, but Paul who accompanied them has owned a 9.2m Cheetah since 2010 and was able to reassure the rest of the crew that this was nothing a Cheetah couldn’t handle.”

Paul said; “If the sea was always like this, we could go out fishing every day with a 9.2m Cheetah”

Once safely in the long entrance to the marina at Nieuwpoort, Phillipe commented on the ability of his new Cheetah. “I had heard from several other Cheetah owners how good the performance is in windy conditions. At the beginning of the trip I was afraid to see such big waves, but after a while when you see how well the boat behaves, you feel very safe.”

Kejo is the 9th Cheetah angling boat that is berthed at Nieuwpoort and joins a fleet of both recreational and professional fishing Cheetahs.

The wheelhouse measures 2.5m from the dash to the aft bulkhead and features a table and seating for 5. Further space behind the helm is available to accommodate a galley. Forward of the dash a seatoilet is located in the port hull with additional storage on the starboard side. Kejo is powered by twin Honda 250hp outboards which like many of the Belgiun Cheetahs will be converted to run on LPG. The conversions are carried out by Nautic Centre, Rijnzicht of Katwijk, who have considerable experience with Cheetah Catamarans.

Cheetah Marine has designed and fitted a central deck box to house 12 LPG bottles and which can also double up as seating and a worktop.

A further two of the 9.2m series at lengths 9.2 and 10.2m are on order for delivery to Belgium later this year. Cheetah Marine has a full order book leading into the spring including a 9.7m version of the 9.2m hull with a new style side access walkaround wheelhouse. 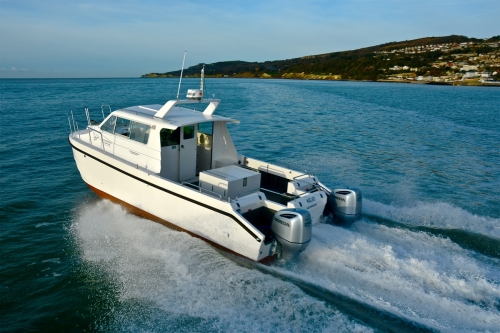