Cheetah Number 300 stationed in the even Wilder West

Cheetah Marine's latest catamaran and 300th built to date has been delivered to the Camusrory Estate. This well known Sporting Estate on the west coast of Scotland is further removed from suburban life than you could possibly imagine. We’re talking extreme remote wilderness, at the far end of a sea loch fourteen miles from the nearest road. Throw in a few Monroes, a river and thousands of acres of raw highland and you need some significant logistics to ensure not just survival in what can be an incredible hostile location; but in the case of Camusrory complete hospitality and wellbeing.

The gentleman who managed the purchase of the boat is co Owner of Camusrory, Rupert Soames, O.B.E. In addition to a string of credentials longer than Loch Ness, Rupert is Chief Executive of Aggreko, the world specialist in providing temporary energy solutions. In the simplest sense, Rupert's company brings power to people when they need it in a hurry or for a short period of time. Sometimes this means providing power to whole cities in developing countries; he was recently involved in providing diesel and gas fired generators to power areas of Japan worst hit by the earthquakes and tsunami, and Aggreko will be providing the temporary power for the London Olympics. Once you review his past accomplishments, taming remote Scotland starts to appear a simple feat for a man like Rupert, who is incidentally Winston Churchill’s Grandson. The family traits are obvious and run far deeper than a love for expensive Cigars.
With the great pleasure of Rupert asking Sean to accompany him on the 690 miles delivery trip I took the opportunity with less dignity than a stowaway and asked somewhat modestly 'if I may be able to come along for the ride'. Also on the crew was Rupert's son, 15 year old Jack and Murray Macleod of Sea Trek Charters, Lewis.

Once we completed the 690 mile delivery with strategically planned fuel stops (to be detailed in a later posting) I had a chance to talk to Rupert about his decision to select a Cheetah Catamaran for the role of ensuring year round access to remote Camusrory. Here Rupert tells the full story of selecting, specifying, and sailing his beloved 'Carnach' home as well as a sure way of making oneself very popular with fellow boaters in the area.

What criteria did you have when selecting a boat?
"Firstly, space and stability. We carry a lot of bulky but not necessarily heavy loads. Everything has to come into the estate by boat. Good sea capabilities were essential as we experience some very difficult sea conditions and can't afford to get stranded when we have severe weather. The Estate Manager, Victor Stockwell is a very experienced skipper and has to have a boat that can operate in all weather which includes some extreme conditions.
We decided on a catamaran because with a cat you get a lot of boat for the money, and because we had a specific requirement to be able to beach her, particularly on the western isles and of course for deer extraction from remote locations around Loch Nevis and further afield."

What made you choose a Cheetah over other catamarans on the market?
“There are four or five very happy Cheetah Owners within 40 miles of Mallaig. I talked to them and they gave a glowing reference in each case. The majority are commercial fishing Cheetahs as well as the Estate Boat which operates out of Kilchoan on Knoydart.”

What are your impressions following the 700 mile delivery?
“Carnach was delivered at the expected cost, and on the exact day we had planned six months before, which is a rare thing in boatbuilding. The 690 mile delivery cruise took 4 days from Ventnor to Mallaig with strategically planned stops according to fuel availability. I started planning about a month ago, although it has been in my diary since the contract was signed in November. Delivery had to be the third week of July so that we would have her during our stay at Camusrory in August.
The delivery voyage was absolutely fantastic and ‘Carnach’ ran like a dream. I am delighted with her.”

Tell us about your customer experience with Cheetah?
“I was hugely impressed by the management of the building project. There was superb attention to detail and planning particularly, and it was all organised by Barry. The specifications we asked for were quite testing for Cheetah because they involved unfamiliar engine installation and a highly sophisticated electronics package. I am very keen on fly-by-wire and electronic engine management, and having the flybridge made it a necessity. We also wanted the Electronic Management System linked to the Simrad Navigation System. There was a lot of new stuff for Cheetah to fit and integrate.
After dealing with Sean for the sale and specification, I was initially sceptical when Sean said I would be dealing with Barry for the build. However, it was a brilliant combination and Barry is a complete joy to deal with. He was incredibly detail conscious, remembers everything and is highly efficient. So while Sean and I were ‘geeky’ about engines and plotters, Barry and his team were getting the boat built. He is very technically competent and knowledgeable, and I learnt a lot from him.”

Memorable moments on the maiden voyage to Mallaig?
“We saw a Fin Whale in the Irish Sea when we left lands End and two huge plumes of spray being blown into the air. Between Bangor and Red Bay there was a heavy chop and confused sea, which would have been quite uncomfortable and slow in a lesser boat. It was a joy to discover that with Carnach, the faster you run, the better she rides, and we ended up punching through it at over 30 knots.”

Why did you go for the flybridge model?
“Basking shark spotting and somewhere for the teenagers to go so they think their parents can’t see them.... But we can... via the video link and cameras! It is also useful for maneuvering in tight places, because you get terrific visibility.”

What will Carnach be used for and in particular any unusual aspects?
“She is an Estate boat mainly transporting personnel and supplies between Mallaig and the Camusrory Estate which is not accessible by road; Carnach is the lifeline. We will run her out to the islands including St Kilda which is 120 miles away as she has a total range of 300 miles when cruising at 25 knots. She will also be used for fishing, deer extraction, basking shark and whale spotting.”

How did you work around the lack of fuel availability in such remote locations?
“North of the Clyde it is very difficult to get hold of quay side petrol. This was probably the biggest issue in boat selection. Although we knew we wanted a Cheetah with outboard engines, filling by jerry cans would be simply impractical. We resolved this issue by the simple expedient of buying a 1000 litre fully ADR compliant Bowser which we fill at a local fuel station. In the context of the overall cost of the boat, the additional cost of the bowser was not enormous and buying it means we have the boat we want with the engines we want at the place we want it.
I also note, there is a lengthening queue of other petrol boaters at Mallaig lining up wanting to use the bowser.” 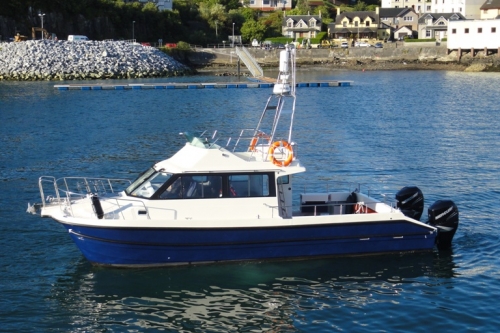