Introducing 'Ocean Potion', the first Cheetah to feature a flybridge and the first flybridge boat in Europe to be powered by the new Yamaha 350hp outboard engines.

'Ocean Potion' will be based on Ireland's west coast, servicing the small privately owned island of Inishturkbeg. Not content with simply reinhabiting an island in their spare time, London based Nadim Sadek and Sandra O'Malley have transformed 'Inishturkbeg' on the west coast of Ireland, into a brilliant new brand. The Island redefines common perceptions of luxury and provides an entire island that allows guests to escape to a world of freedom - nestled between the Atlantic ocean and the edge of the sky.

The aim was to design a large catamaran that would deliver both refinement and functionality. With a beam of 3.7m and deeper, high volume semi symmetrical planning hulls, the new series is proving to be a considerably high capacity and versatile craft.

The 11.2m flybridge series proves that gaining space no longer means losing style. The large open plan wheelhouse is the perfect environment for a whole range of applications from commercial workboat to private leisure use. Further forward berths and wet room facilities compliment the onboard facilities.

Nadim Sadek "Ocean Potion' is our second vessel from Cheetah Marine. We've used the classic 6.9m for three years as a daily commuter from the mainland to our island, and been continuously impressed by her brilliant build -quality, attention to detail and safety. When we wanted a larger boat, for longer journeys, bigger seas and even remoter locations with groups of up to 20 people, the development of the 11.2m boat caught our eye. Along with massive power, the two 350hp engines give it, we've got a hull which simply eats up the harsh and choppy waters of the Atlantic on the West Coast of Ireland, giving great comfort and reassurance. With a fly-bridge, huge cabin and protected aft deck, we've got just the boat to let us take advantage of the amazing opportunities up by our settings. Inishturkbeg is a beautiful island, where life is vividly lived. 'Ocean Potion' helps it all to sparkle all the more."

Twin Yamaha V8, 350 hp engines develope plenty of power to give the catamaran a stunning performance. Twin controls are operated from both the wheelhouse and the flybrige. Hydrive full hydraulic steering is supplied by Southern Cross. “Ocean Potion” was built to comply with both CE and MCA regulations. A very extensive electronics package includes a Raymarine E 120 in the main cabin and an E 80 on the flybridge. On the outer deck comfortable seating for six incorporates space beneath for an inflatable dingy

The hull is available at a choice of lengths from 9.95m up to 11.2m. Sleek curves, pleasing to the eye whilst maintaining full functionality at sea. The Cheetah proves that pleasure and practicality can go hand in hand.

The next 11.2m on the production schedule is designed as a commercial work catamaran to operate from the East coast of Scotland. Tasks will involve hydrographic survey work, crew changeovers as well as running supplies offshore. 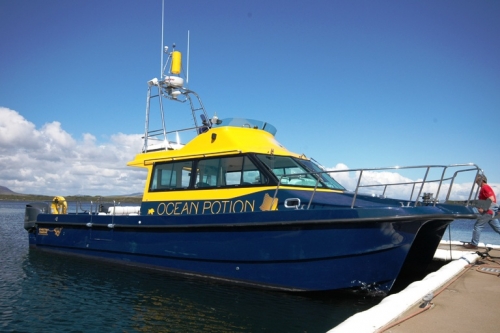