Back in 2003 big game fishermen Steve Dallas from Bermuda came over to England to visit his family in Norfolk. By chance he was at Cromer and saw John Davies coming onto the beach in his 9m Cheetah on a particularly rough day.

Steve Dallas remembers seeing his first Cheetah 'I was sat in a café watching a boat lining up with the shore and I thought, no, that’s not possible’ said Steve ‘but the boat flew towards us and straight up the beach - I’d never seen anything like it – I thought it was going to come straight in through the window! I talked to John for a while and then went back to Bermuda and thought about it for a long time.'

Steve Dallas contacted Cheetah Marine and after many conversations, Sean Strevens, designer of the catamarans went out to Bermuda to talk over the possibility of building a catamaran for him.

Unlike many of the game fishing boats out in Bermuda, Steve said he wanted a real commercial workboat, a large charter game fishing boat which would be stable enough to be comfortable in really rough seas. Sean said ‘In Bermuda the best fish are to be caught 30 – 40 miles offshore. The fish they catch out there are huge – Marlin and Tuna of up to 1100lbs. Together we designed a boat that would be perfect for him and was achievable within the budget.’

The resulting Cheetah is 9m LOA with a beam of 3.6m. A long wheelhouse with Houdini sliding windows houses two suspension seats, a work surface with a sink and a 30 gallon water supply on the starboard side with additional seating on the port side. A double berth is provided plus the space for a marine toilet which will be fitted by the owner. The extended roof overhang of 2.5m supported by a 2“ polished stainless steel frame provides shade for the bait station. This facility, designed by Sean and the owner was moulded and custom built. It provides insulated storage for Tuna. A live bait well with pump, bait storage, fresh and salt water deck wash, a sink and water supply complete the package.

Safety rails all round with an overhead davit all in 316 stainless steel were fabricated in Cheetah’s own metalwork shop. To reel in the big fish Sean has specified a Muir VC2500 capstan with foot controls with a maximum load of 2500lbs and reverse gear. Exterior, interior lighting and navigation lights have been installed. Hydrive twin ram hydraulic steering and balance valve interfaced with a Course Master Auto Pilot controls the engine power provided by twin Volvo AD31 DP power units. These engines of 150hp each will give the catamaran a comfortable 28 knots.

The base for a fighting chair was incorporated into the original lay up. The chair will be fitted in Bermuda.

The proven stability and space of the Cheetah 9m series have resulted in commercial fishing, marine survey, patrol and charter fishing versions. Of the 150 catamarans Cheetah has built, over 100 of these have been the very popular 6.2 or 6.9m series. These have been built mainly for commercial fishing but survey, patrol, angling and diving versions also make the most of the stability and therefore earning capacity of the 6m series. The 2005 6.9m / 6.2m has several new features. 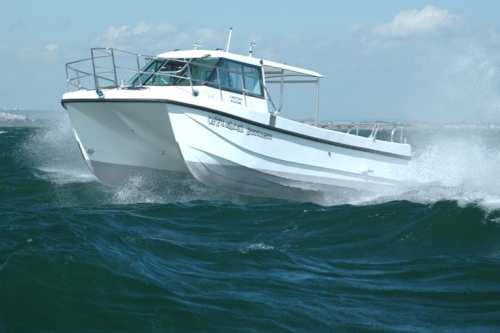