Cheetah Marine’s latest 7.9m Survey Cheetah has been put through her paces during a location handover & training programme with her new team in the south of France.

7.9m ‘Archi-Med’ is located in Sete and will be used for hydrographic work including seafloor mapping throughout the Region Occitane on the French Mediterranean coast.

Cheetah’s 7.9m survey series has been reported as being one of the most versatile small survey boats available and is now being operated by hydrographic offices, research centres and port authorities worldwide. 7.9m ‘Archi-Med’ features Cheetah Marine’s patented hydropod system which enables highly accurate positioning of survey equipment during both transit and survey phases. The hydropod is supported within a triangulation frame to ensure data collected aligns perfectly with position, and recalibration is not required between survey sites. A swinging davit fitted to the aft wheelhouse bulkhead with an electric and manual winch provides lifting for the central moonpool sonar head as well as deployment via the starboard side door for additional survey equipment.

Archie-Med is powered by twin Honda 135hp outboards producing top speeds on sea trials of 31 knots. NMEA data shows fuel consumption is optimum when cruising at 20 knots with an average of 2 litres per mile at 4000rpm. At slower survey speeds, fuel consumption reduces to 1.5 litres per hour at 13 knots.

The survey style cabin features helm and navigator suspension seats, port side work bench with 19” racking and starboard side seating. A Honda 2kVa generator provides additional power for the winch and onboard electrical systems.

Cheetah Founder and Designer, Sean Strevens comments ‘It is very important to our customers that we encourage full input throughout the build process. Although specifications may be detailed at the point of order, they are by no means finalised. It is crucial that the end users can make decisions whilst on the stage built boat in the workshop. This includes small survey additions which make tasks easier and safer for each individual application to more standard helm and positioning of controls and equipment accordingly’

Following La Rochelle Boat Show, Cheetah Marine are continuing to secure orders in the Mediterranean and west coast markets for a range of workboat applications. Production for medium size models particularly for the charter and specialised sportsfishing markets are now underway in the Portuguese workshops. The UK workshops are continuing to produce at full capacity. 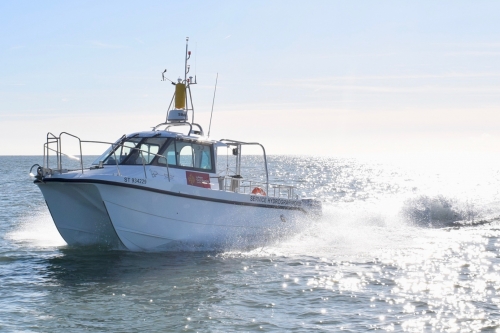