Cheetah Marine will be exhibiting two catamarans on the pontoons at Seawork this year. Both vessels have been built for specific survey and workboat purposes demonstrating Cheetah’s approach to specialized one off builds.

Amidst a string of new builds this spring, Cheetah has recently delivered a new hydrographic survey vessel to the Geological Survey of Ireland (GSI).

7.9m ‘RV Tonn’, meaning Wave in Irish is tasked with mapping areas of seabed around Ireland and follows on from two similar specification Cheetahs developed for the Port of London Authority and the British Geological Survey. To the Irish Surveyors, the experience which Cheetah Marine has acquired in this niche market was of extreme importance.

Archie Donovan, Principal Geologist & joint INFOMAR project manager commented after the recent UAT trials of the 7.9m at Cheetah Marine’s base on the Isle of Wight:

"The RV Tonn is a proven shallow water survey boat, that has been built to the Cheetah Marine 7.9m specification for the Geological Survey of Ireland's inshore Irish mapping programme. We in the GSI, look forward to continued collaboration with Cheetah Marine, on our future survey boats, based on the success and professionalism of the Cheetah construction team throughout this challenging timeline four month build cycle."

‘RV Tonn’ features Cheetah Marine’s patented Hydropod system which enables high resolution surveying to be carried out at relatively fast speeds of 6 to 10 knots. The proven system can accommodate various transducer heads and in this case is designed to house the Reson Seabat T20-P. The system is lowered through a moonpool for surveying and can be raised via a hand winch for longer transits between survey sites with a blanking plate inserted. Previous installations have verified that recalibration of the system after dismantling is not necessary.

Powered by twin Honda 135hp engines RV Tonn has a cruising speed of 16 - 18 knots and a top speed of 25 – 27 knots. Inbuilt 150 litre inbuilt aluminium fuel tanks each side give the catamaran a range of up to 150 miles at cruising speed.

The long wheelhouse features a port side work station above 19” rubber mounted computer racking, a starboard side bench and suspension seating forward. Extra space forward of the dash accommodates the marine toilet.

On the aft deck a Honda 2Kva generator in a moulded box supplies the extra power required for surveying.

Sean Strevens, Cheetah designer, said “The 7.9m has proved itself over and over again with its ability to undertake many different survey roles using different types of specialized equipment.We are very pleased to be able to offer such a versatile vessel”

Cheetah Marine is now celebrating 25 years in production and has just launched the next generation 6m series. The new series offering more deck space and a greater load carrying capacity has been designed to take advantage of recent advancement in outboard engine technology.The 6m series has been popular amongst harbour authorities and hydrographic survey companies as a trailerable survey boat. Cheetah Designer Sean Strevens says ‘Customers will benefit from even better fuel economy, more space and a softer, smoother ride.’ 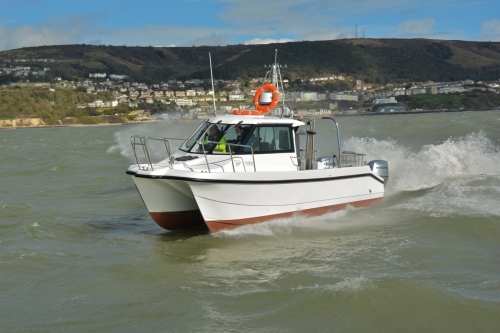