The first of Cheetah’s cabin 11.2m series to be built in Portugal received an incredible welcome from visitors at Lisbon’s Nauticampo Boastshow last week. 11.2m Maya is built purposely as a diveboat and will continue her journey south to Sao Tome Island over the coming month.

Part of a volcanic chain extending into the depths of the Atlantic, São Tomé is located 100km from the coast of Gabon and 2km north of the equator. It’s the second smallest country in Africa and at over 2000m high is a mix of peaky volcanic slopes with tropical rain forest, wildly snaking rivers and turquoise waters.

Maya has been built for Club Santana Beach and Resort who operate Atlantic Diving Centre and water sports from the resort on the east coast. From the resort, there are cave dives which go under, through and circumnavigate a nearby island as well as wreck and reef dives from 5 minutes to 1 hour from the resort.

Renowned for the infamous biggest surfing wave close to shore, Maya was sea trialled and tested between Nazare and the safe haven of Sao Martinho do Porto on the west coast of Portugal. The 11.2m is powered by Yamaha’s 250hp outboards with top speeds recorded at 41 knots and an efficient cruise at 3000rpm of 21 knots at 48 litres per hour.

With a hull length of 11.2m and a beam of 3.7, Maya has a spacious deck space of 25m2. The cabin features galley, table and reversible seating open to the deck with back to back seating and bottle racks sheltered by the cabin overhang. Forward of the dash is a port side toilet with open space for storage across the central bridge and starboard hull.

Atlantic Diving Centre specified coding for 16 divers with all equipment plus crew although the Cheetah is CE marked for 20 passengers. Divers can access the water through the side door or aft between the engines. The electronics package comprises of linking Yamaha data display, Hummingbird dual Helix 12 and 7 screens for chart plotter and echo sounding with Navicom and Entel Submersible radios.

Dive master Amando Quiroz is looking forward to working with the new Cheetah after visiting the workshops near Nazare throughout the build process and attending sea trials.

‘She’s fantastic, it’s true. She is completely made to measure. Very stable with excellent sea handling throughout the testing. She has already had huge interest both in the harbour and at the show. I can’t wait to start working her from São Tomé’

The 11.2m will also double up for site seeing, sunset cruises, paddle boarding and snorkelling trips from Club Santana.

‘It’s a different way of being on the sea, to what we are used to in Portugal. To be in a Cheetah Catamaran is a different level of comfort; emotionally and physically. You feel the safety and you feel the ease on your body. In a monohull after passing a day at sea in the conditions we often work, your body feels very tired. In a Cheetah everything is easy.

Our recent delivery was 9m Amador to Peniche with Helder’s father who’s spent 40 years working at sea in hard conditions. With twin 80hp, against the weather, rather than slowing down the Cheetah simply craved more power and at 20 knots he commented that he never thought these speeds possible in such conditions.’ 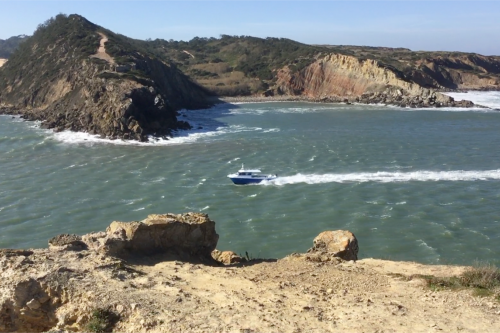