Upon its completion, John expressed delight at the quality of the build and the versatility of the product but, having already owned a second hand 6.2m Cheetah since 2006, was already a Cheetah convert. John decided to upgrade to the larger 7.9m series to enable him to get to sea more often throughout the winter months.

‘Top Gun’ will be used mainly for angling and John is already planning 80 mile round trips from his base in Southwold, Suffolk. A big attraction for John was Cheetah Marine’s ability to build to his exact specification. During the build, he made several visits to the Cheetah workshops to look at and have input whilst Top Gun was at various stages of completion.

Second hand Cheetahs are renowned for fetching high resale prices, sometimes exceeding the original sale value. Over the last 5 years, Cheetah Catamarans have become increasingly popular with anglers especially where time at sea is already restricted by work commitments as well as the lack of daylight hours. Anglers can take advantage of the exceptional hull performance proved through decades of commercial fishing and enjoy a comfortable days fishing in even the poorest weather. 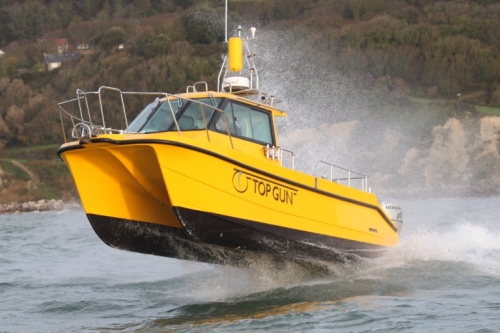