Following a 500 mile delivery voyage the latest 9m Cheetah Catamaran has settled in at Royan, a small harbour town in south west France where Atlantic waves, rolling swells and dangerous rocks are all part of a days fishing for new owner Michel Julin.

The latest Cheetah delivery, “NODENS” is“magnifique”, so says new owner Michel Julin after a 500 mile trip from the Isle of Wight to the south of France. Noden's new base is at Royan, a small harbour town 25 miles south of La Rochelle on the Atlantic coast in South West France.

On the first leg of the voyage back to France between the Isle of Wight and Guernsey “NODENS” maintained over twenty knots despite encountering heavy seas in the channel due to strong South Westerlies.

Michel had initially been impressed by a 6.9m Cheetah which came to Royan many years ago and after a visit to the Cheetah yard ordered a 9m. After talking over what he wanted from the boat, a detailed specification was drawn up to suit all that Michel needed.

The2.5m long wheelhouse with a 500mm cabin overhang has two suspension seats for helmsman and navigator, starboard side seating with a folding chart table, seatoilet and galley. Twin engine hydraulic steering was supplied by Southern Cross and mooring is taken care of with a Quick anchor winch and an anchor locker in the foredeck.

Twin 250hp Honda outboards and twin 250 litre fuel tanks give the boat a range of approximately 250 nautical miles. The stainless steel rails and roof mast gantry were made to measure in house and five layers copper coat antifoul will keep the barnacles and seaweed at bay.

‘NODENS’ is the 11th Cheetah this year which has been built to angling specification.

This is not a new line for Cheetah but our response to repeated enquiries from anglers who want to benefit from our commercially tested hulls with their own specified layouts and interiors. 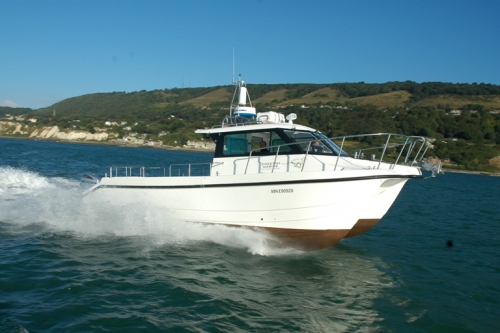