A full order book into the summer months with commercial and recreational fishing Cheetah designs, including exports for Belgium and the first hydrogen powered boat using HICE technology, makes the future exciting for this island-based company.

The purchase of Outhill seat, consoles and moulding range has extended their deck hardware.

“Cheetah is the choice for Welsh fishermen,” commented Lucy Strevens, adding that Don Cownon is very happy with his new 11.2m Shamu which is based in the tidal harbour of Saundersfoot.

“The shallow draft of the Cheetah gives an extra half hour either side of the tide,” Don told Fishing News, commenting that linked to its extra speed they have gained more than an hour’s fishing compared with their old boat.

“ I spent five weeks completing the fit-out which features a 1.2m offset wheelhouse with the winch position well forward. There’s an inbuilt stern shoot with removable deck pounds and storage for 120lt of fuel,” he added.

Sean Strevens, Cheetah Designer says that the 11.2m hull has a low resistance which is well matched to the 2.6ltr Yamaha and Selva engines. “It’s a perfect fishing machine for offshore fishing grounds with a top speed of 30 knots and a good cruise at 20. Matthew Bull also from Saundersfoot has joined Don in purchasing one.” 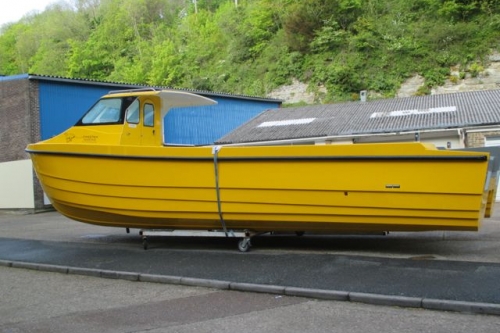