Cheetah Marine, Isle of Wight catamaran builders have reported a good year for both commercial builds and leisure catamarans.

Sean Strevens, Cheetah Designer comments ‘We are now building around 27 boats a year. As well as the increase in production we are seeing a marked increase in the larger models, with the 9, 10 and 11m models the most popular across all sectors of applications.’

This change has come about recently and whilst Cheetah Marine is now in is 25th year of production, until 5 years ago, the original 6m series was the most popular Cheetah Catamaran.

‘Many of the original Cheetah owners are now upgrading and either opting for an over 10m fishing license and buying the 11.2m x 3.7m beam Cheetah. It is a very efficient boat with outboard engines.’ Comments Sean.

Amongst the commercial fishing builds this year include four of Cheetah’s beamiest 3.7m hull, built at 9.98m and 11.2m. The 2013 update to Sean’s popular 9.95m x 3.6m series has also secured many orders with six commercial versions built this year including an export to the Canadian east coast fishery.

‘We lifted the bridge deck to increase load capacity of the original 9.95m series which has been thoroughly tested by many commercial fishermen over the last 20 years’ said Sean ‘By adding inner and outer tunnel bridgedeck chines we’ve also managed to further improve comfort and fuel efficiency at low power. ’

A recent example is 9.2m ‘Kraken’ a Stage B Cheetah from the 9.95m x 3.6m mould. New Owner Marcus Hyde is based near Chichester and has reported top speeds of 22 knots with twin Yamaha 70hp outboards. As a fishermen of 30 years, owning and building a succession of boats, Marcus decided on a Cheetah when he took out the 9m demonstrator from Ventnor Haven in a 7-8 easterly.

Marcus will be fishing up to 50 mile round trips, potting and drift netting around Selsey, the Nab and the south side of the island.

Marcus completed much of the build of ‘Kraken’ himself including the electronics and installation of engines and steering. Deck machinery, hydraulics and stainless steel was fabricated and fitted by local firm Solent Engineering also based in Chichester. Dave Middleton, Solent Engineering commented on the project;

“Marcus has many years past experience dealing with Solent Engineering. After an initial site assessment we began fabrication back at our works, which concluded with two days fitting the stainless and commissioning the hydraulics. We were proud to work on such an impressive vessel and wish Marcus all the best for the future.” 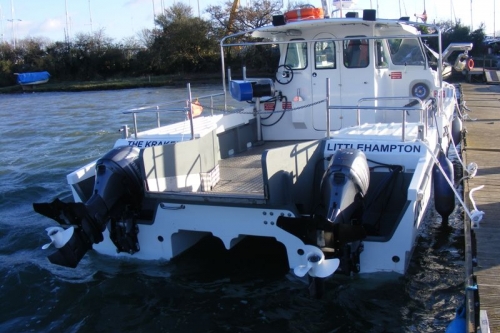