Another Euro first for Cheetah

9.2m Topcat was completed for new owner Cliff Poulter to take part in the Round Britain Challenge in July. The 9.2m x3.7m Cheetah is powered by twin Honda 250hp outboards and is the first boat in Europe to feature two of Seastar’s Optimus 360 joystick control systems.

Europe’s first Optimus 360 installation was previously tested and demonstrated aboard ‘Cheetah’ at Seawork 2013. The revolutionary system aroused significant interest, amongst both consumers and other marine exhibitors at the show. From demonstrations aboard Cheetah, Cliff developed Topcat’s specification further to feature a full cabin system integrated with Simrad electronics and an external joystick mounted on the aft wheelhouse bulkhead in the cockpit. With a choice of control stations, Cliff can manoeuvre Topcat using the slow speed, sideways motion which assists docking in confined marinas and berths.

‘After seeing many powered catamarans whilst travelling in New Zealand, we started to look around the UK for a catamaran to replace our cabin RIB. Much to our surprise we found Cheetah Marine close to our Poole home at Ventnor on the Isle of Wight. Cheetah Marine’s capability to tailor their craft meant that our exact requirements were met. As well as being used as a day boat for entertaining friends and family we required long-range cruising capabilities. We wanted a heated cabin which could accommodate six forward facing seats as well as seating for five around the dinette with an option to convert to a double bed. All this aboard a 9m boat’

Sadly due to fueling problems associated with a large fleet of powerboats visiting some of the UKs more remote coastlines, the Challenge was cancelled. Cliff and Chri still intend to raise awareness and collect money for three charities which offer on the water experiences to disabled persons. A new voyage plan is currently underway. 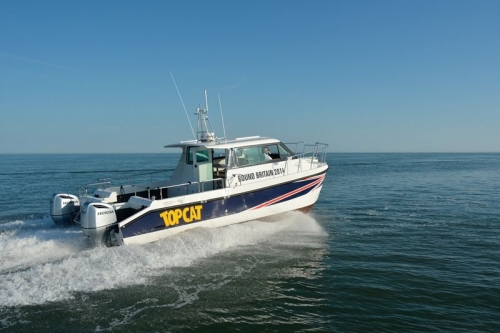