April at the Cheetah workshops has seen the launch and seatrialling of three very different Cheetahs, all destined to Wales for a host of specialist charter operations.

The Charter Cheetahs measure in at 9m plus and despite sharing the same concept, are an excellent demonstration of Cheetah Marines flexible approach to each build.

Seabass Safaris
‘3 Fishes’ designed and built for Tim and Corinne Harrison of New Quay is an extended 8.5m with a 3m beam and has been fitted with the small 6m series wheelhouse enabling a fully walkaround fishing platform. With twin Suzuki 70hp outboards she has a cruise speed of 20 knots and is coded to carry up to 12 passengers on sea fishing trips from New Quay. Inbuilt passenger seating is provided forward of the central wheelhouse on the bow with a straightforward access via companionways from the aft deck. Additional sheltered seating is provided by back to back benches on the deck. The deck also features a live bait station.
Tim, a pro bass guide and feature writer on sea bass fishing for Sea Angler Magazine comments:
“We are more than pleased with the way ‘3 Fishes’ has turned out. I am sure that she will be an asset to both our business and the wider community as she starts to deliver her build purpose this summer by providing sustainable, low environmental impact, low cost sea fishing for all;”

White Water Charters
Whitewater is the increasingly popular 9.2m hull and Cheetah’s beamiest at 3.7m. Proud new owner Andrew Alsop specializes in shark fishing charters in the Irish Sea. Target species include Blue Shark, and Porbeagle with immediate release to ensure a healthy shark fishery is sustained. Andrew boasts some impressive records including boating 57 blue sharks in one day with top weights exceeding 200lb. In addition to shark fishing, Whitewater will also continue to run wreck fishing and reef fishing trips in the Bristol Channel and along the west coast of Wales.
The 9.2m has been designed with fishing space in mind. The large deck provides over 15m2 of clear fishing space whilst maintaining a generous wheelhouse area for extended trips. On delivery to Southsea, Andrew recorded impressive cruising speeds of 21 knots with fuel consumption at just 2 litres per mile. Top speeds with twin Honda 200hp outboards were measured on seatrials at 37 knots. Andrew has owned and run a series of charter boats and always admired the small Cheetahs operated by commercial fisherman zipping around in rough weather and became convinced of the Cheetah outboard set up after seeing Geoff Blakes 9,95m Cheetah working from Ventnor. The new 9.2m Whitewater will cater mainly for small group fishing trips of a maximum of 5 anglers although she is coded for up to 10.

Thanks to Gareth Davis and Mike Groves for this fantastic video of White Water on one of her maiden voyages.

Dolphin Surveys
Located in the same village as ‘3 Fishes’ Steve Hartley’s new 9.95m 'Anna Lloyd' Cheetah has its own unique set up and is bristling with bespoke stainless steel, all designed and fabricated by Cheetah Marine. Used primarily for dolphin spotting and survey, 'Anna Lloyd' will operate daily trips of 2-8 hours and has been MCA coded for up to 12 passengers.
The midsized wheelhouse features a stainless steel tuna tower for dolphin spotting. Accessed via a ladder on the starboard side of the wheelhouse, the tuna tower features seating for two and with a secondary Glendenning control station is fully operable from both the upper and wheelhouse helm stations. Steve also specified an overhead awning with removable clear sides to protect passengers in poorer weather. Back to back seating for 12 passengers is provided on the aft deck which is fully protected by the wheelhouse and with the optional clears. Other stainless work included full rails to MCA standard and keel bands to protect the hulls when beaching or working in shallow water.

For more details of our Cheetahs as they are built and launched see: www.facebook.com/CheetahMarine 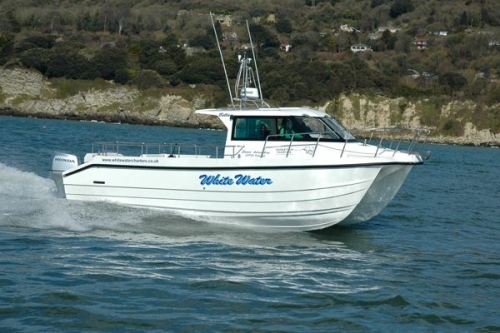