A new 9.95m Cheetah Catamaran has arrived in Devon ready for commercial rod and lining. ‘Dartangler’ has been bought by 4 friends from the Dart Angling Association who intend to fish inshore bass marks off Dartmouth as well as Mid Channel wrecks as far afield as the Channel Islands.

New owners Rob Dart, Paul Blight and David Pakes have a range of marine backgrounds from commercial potting to highly experienced rod and line fishing and each owning a succession of small fishing boats over the years. The boat they required had to be built to high commercial standards, stable on the drift and with a good economic performance.

After initially looking at larger monohulls with inboard engines they discovered it was virtually impossible to acquire a suitable license to cover this type of vessel.

It was back to the drawing board. After some glowing testimonials from existing Cheetah owners and a visit to the Cheetah workshops an order was placed for a 9.95m model. The specification developed with various discussions over the following months resulting in ‘Dartangler’ becoming the first Cheetah to feature a newly designed wheelhouse.

‘Dartangler’ has been fitted with twin 135hp Honda outboard engines which fits the Under 10m fishing license with 270 hp available that the group managed to acquire. Both engines are rigged independently to a 300litre under deck stainless steel fuel tank system.

David Pakes comments ’Our run home, some 91 miles through Portland Race was completed in 3.5 hours taking care to keep the engines at 3800 revs. Since then we have used her for a number of angling trips and are getting to know her well. She is everything we expected of her and more! We have experienced 26knots of wind Mid Channel to date (data from Channel Lightship), some big Atlantic swells and she takes it all in her stride. Economy is outstanding, even with full tanks, 5 anglers and a quantity of fish and ice on board. We have not found it necessary to increase the revs at all and find 3800, gives 20knots in most conditions, more than acceptable, knowing that we have a lot in reserve, but will be conserving the engines and fuel at this level. Traditionalists might argue in favour of diesel powered craft, but with VAT and fuel duty reclaimation the petrol outboards compare very favourably indeed in running costs.'

Dartangler is equipped with a full Raymarine C120 electronics package, including radar and autopilot, with plotter and sonar backup from duplicate Furuno equipment.

The newly designed wheelhouse gives comfortable seating for 5, with a bunk and toilet in the forward cabin. Heating is provided via a diesel burning Wallas combined cooker and fan heater fitted adjacent to a sink in the galley area. Outside, the wheelhouse overhang extends aft to cover a stainless steel bait station designed to the client’s exact specifications. Three Seaplast insulated fish bins enable the fish to be kept in ice and as fresh as possible for market. The system also includes a Tek-Tank live bait well with inbuilt pump to keep the water aerated and Jabsco deck wash.

'Whilst at Dartmouth "Dartangler" has attracted viewing by a steady stream of both commercial fishermen and recreational anglers, all of whom have commented very favourably on the vessel. We are delighted with her! She is an outstanding angling vessel and of course already enjoys a good reputation with commercial crab fishermen. At less than half the cost of some of the heavier and larger catamarans on the market, Cheetah's are worthy of serious consideration by any potential buyers' 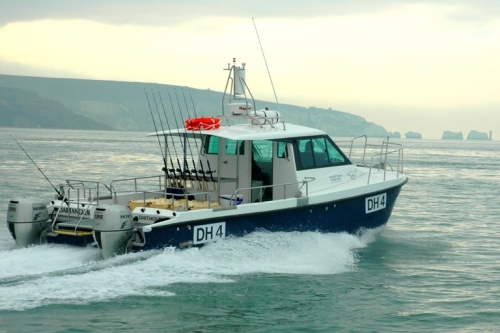