Forth generation fisherman Nolan Orford has ordered his first new Cheetah.
Nolan who has been fishing since he was 6, has owned and worked a 6.2 and an 8.5m Cheetah, both second hand fishing catamarans.

The 9.95m Cheetah named 'Andy O' will be based at Newport in the winter and Pembroke in the summer.
Target species will include dover sole, bass, cod and skate.

Nolan who appreciates the security and stability offered by the Cheetah comments;
'We used to drift net 11 miles out in a 16ft open boat. In those days no one liked fibre glass and a wheelhouse was thought to be false security. Times change, we've had to keep reinvesting and turning to different fisheries to keep going. We never had a down day with the 8.5m Cheetah. Nothing stopped the Chloe Rose from fishing and nothing worried me whilst in that boat. I look forward to putting the new 9.95m through her paces'

Sean Strevens, Cheetah Designer reported top speed of 17 knots during sea trials with twin 40hp 1.7ltr Selva outboards. 'Andy O' has been delivered to Solent Engineering in Chichester for installation of SSHO3 net hauler and the completion of the under deck diesel power pack fitted by Cheetah. The stern features a cut out for a net shoot.

Following a busy Autumn with the majority being commercial fishing builds, Cheetah Marine has a busy schedule leading into the summer. 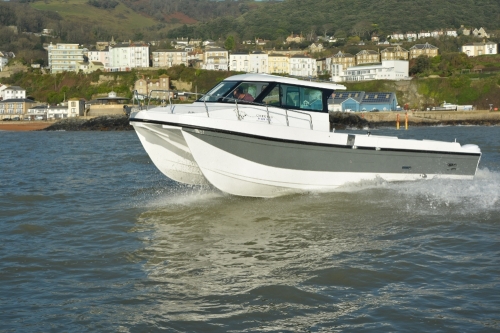