Cheetah Marine has again teamed up with Reson to provide a fully integrated survey catamaran designed specifically for the Port of London Authority.

The new vessel ‘Galloper’ will be employed all across the Port of London, from the upper reaches of the Thames, out to Clacton on Sea and Margate. The PLA’s hydrographers were initially impressed by Cheetah Marine’s commercial workboat background with hydrographic survey Cheetahs working throughout Europe and as far afield as Saudi Arabia. ‘Galloper’ is one of the popular 7.9m Cheetah Catamarans, which have earned an outstanding reputation as an extremely versatile workboat, complimented by Cheetah Marine’s ability to customise each boat according to the customer’s specific survey applications.

The main duties of the PLA’s hydrographers are to provide accurate charting of the river bed, throughout the 140km tidal stretch of river and estuary that falls under the Authority’s jurisdiction. Following the successful mounting of the 8125 and moonpool system on Surveyor 1, commissioned by the Saudi Ports Authority, Cheetah Marine has worked closely with Reson installing into ‘Galloper’ the new-generation Reson SeaBAT 7125 multibeam echosounder, sound velocity probe and POS MV Motion Sensor by Applanix. The instruments are mounted within a hydrodynamic pod which can, for quayside wall surveying, be tilted at a 40 º angle before being lowered through the moonpool into the water column. With a 400kHz frequency, the 7125 MBES receiver covers a 128º swath with ultra high resolution and a maximum range of 300m. The PLA also has the option of fitting a lower 200kHz frequency bathy transducer, to aid surveying of areas with very dense fluid mud. A second pod incorporates an Acoustic Doppler Current Profiler (ADCP), making the Cheetah launch one of the most versatile small survey boats in operation, anywhere in the world.

'The Port of London Authority is highly delighted with the design integrity and build quality of the 7.9m Cheetah Marine Catamaran "Galloper" which, with its Reson multibeam sonar set for efficient high-resolution surveying, is providing the PLA with high-quality images for both statutory and commercial marine survey work.Both operational and engineering managers and staff found the Cheetah Marine team dedicated to the development and delivery of their boats and innovative when required to find technical solutions to the challenges raised in producing so much within such a small platform. The result is demonstrably the most space-efficient survey craft available on the commercial market.'

Operation of the 7125 MBES in tilt mode will enable the PLA to carry out high resolution inspections of vertical engineering structures including bridges, harbour walls, breakwaters, piers and outfalls. The ability of the Cheetah Catamaran to survey structures in a matter of hours, as opposed to weeks when compared to traditional diver-surveys provides a hugely more economic and less hazardous solution. The PLA will be able to deliver clearer, denser images to their clients, whilst improving survey efficiency. Transit lines can be completed at survey speeds of 4 to 11 knots and transits between sites can be achieved at higher speeds with the multibeam in the raised position. When the multibeam is in the raised position a blanking plate is bolted into the moonpool which follows the hull lines for top speeds. The hydrodynamic pod is then secured within a stainless steel superstructure ready to be deployed at the next survey site. Dowel pins are used to fix the system into exactly the same place after each successive deployment so recalibration is not required.

‘Galloper’ is fitted with twin 135hp Honda fourstroke outboards, attaining a top speed of 25 knots and minimizing transit times between survey sites. The PLA’s Hydrographers will have more time acquiring data at specific sites, essential when surveying busy ports or tidally constrained waters. A draught of only 30cm enables shallow water and drying banks to be accessed. The whole rig is readily transportable between survey sites and can be slipway launched and recovered.

Inside ‘Galloper’, the long survey style wheelhouse is fitted out with a port side work bench, with storage below housing computer hardware and survey equipment. Behind the helm suspension seat is a starboard side work top incorporating small galley area, fridge, sink and water supply. Three computer screens are fitted on the dash, adjacent to the helm, giving real-time visualization of the survey data. Forward of the dash is a sea toilet, with additional storage space for safety kit. Cheetah Marine has fabricated stainless steel rails all round and the vessel conforms to the MCA Code of Practice Category 3, 20 miles from a safe haven.

"The Port of London Authority is delighted to work with Cheetah Marine on this important project. We have enjoyed working with Sean, Keith and Lucy before, on other innovative projects. We can thoroughly recommend the quality of Cheetah Marine vessels and the company’s dedication to achieving the customer’s requirements." 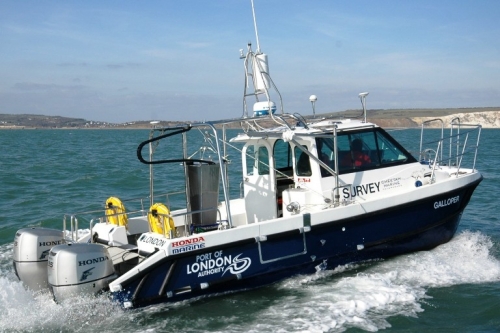