7.9m Cheetah designed and built for operation by Skipper in Wheelchair

Thanks to Vic for this excellent account of his Cheetah experience.

Having finally retired from business at age 66, Joan and myself bought a holiday apartment on the quayside at Poole in Dorset. After spending a year or so watching others having fun “messing about in boats”, we decided to join the ranks of boat owners. Only two problems needed to be overcome; firstly, absolutely no experience whatsoever in handling a boat, and secondly I have been in a wheelchair since 1965.

One of the advantages of being in Poole harbour was that a specially adapted catamaran operated by volunteers of the charity “Friends of Dolphin” provided trips for the disabled and elderly in and around the harbour. A few trips on Dolphin III accompanied by some serious interrogation of the patient crew meant I felt confident about specifying a catamaran for my own use.

Since Dolphin III was built for the charity by Cheetah Marine in Ventnor, Isle of Wight, they seemed to be the obvious people to talk to. A series of discussions and drawings led to a firm contract by December 2008 with delivery estimated as October 2009.

As an 'eligible person' as defined by HMRC 'the extent of the adaptions also meant that the purchase qualified for zero rating of VAT.

A number of trips to the factory during August and September allowed the Cheetah Engineers to “fit” the adaptions to suit my particular requirements. The boat was delivered at the end of October - just in time for winter!.

Next on the agenda is a training course for Joanand myself to Powerboat Level2/ICC and VHF licence.

The whole project has gone remarkably smoothly, mainly because Cheetah Marine has injected a great deal of attention to detail and amount of collaboration. Cheetah Project Manager, Barry Sales, also noted that Joan had problems with arthritis and incorporated some additional grab bars to help her move around the deck.

Where did the name HADRON come from? I was an electronics designer specialising in equipment used in high-energy physics research in such places as CERN, Geneva. In fact some of my designs were used in the LEP experiment which was housed in the 27km tunnel before the Large Hadron Collider [LHC] was built.

This was a remarkable project. It was good to work with someone who has such specific requirements. We wish Joan and Vic the best of luck for the future and hope they have years of pleasure on the water. 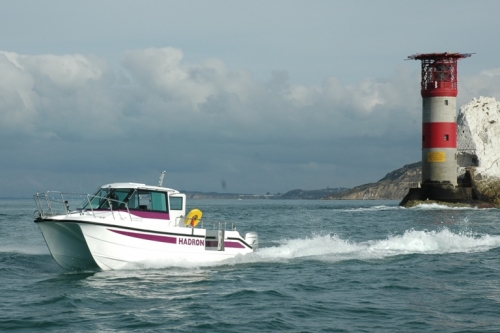