250 Not Out:  A Noble English Innings

It seems but a short while since BoatMart first visited the Isle of Wight to meet Sean Strevens. Back then he was barely out of his teens but he was already hand building catamaran fishing boats in a shed at the back of his dad’s bungalow. Much water has flowed under the bridge over the years and the fledgling Cheetah Marine had grown in leaps and bounds, as indeed has the Strevens Family.

Sceptics said that neither pleasure boaters nor traditional fishermen would ever buy these very efficient and highly innovative craft but they have, including BoatMart readers, which must surely bring Sean a wry smile. In fact, in a recent visit we recently saw far larger Cheetah boats being built in a brand new waterside factory at Ventnor and discussed how the Catamaran concept has grown to the extent that Cheetahs of varying hues and sizes can be seen in harbours, and indeed on beaches, all around our coastline.

Now, the 250th Cheetah, a 7.2-metre boat named "Sushi", has been delivered to two recreational fishermen, Eddy Claes and Erwin Reijmenants, in Belgium. So keen were the guys to get a Cheetah that, having overstretched their budget, they bought it as a part-completed boat with engines and steering fitted and completed it themselves, to a very professional standard.

We send our congratulations to Cheetah on this memorable production milestone and wish Eddy and Erwin tight lines. We are delighted to say the marine Cheetah is definitely not an endangered species. Roll on the 500th ... 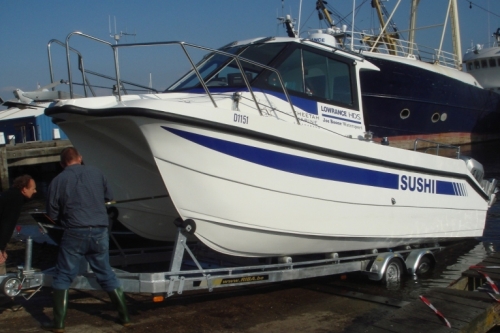