During mid February two of the latest 9m series were launched and seatrialed ready for their maiden voyage to the Continent. Both boats are set up for professional rod and line fishing for seabassand cod in the North Sea and join the numerous Cheetahs already based on the Lowland Coast.

Setting off at a moderate 10am on the19th February, both Cheetahs reached their new home ports of NeeltjeJans in Holland and Nieuwpoort in Belgium by nightfall, joined by crews of family and friends who were keen to get a slice of the action.

‘We are just off Brighton. The sea is pretty rough with waves on the stern. So Hilton style – haha’ Erik ‘Bruinvis’

‘Half  an hour to go, everything “picobello” and “super de super” boat’, Peter Dezutter, White Pearl

Father and Son team Marc and Peter Dezutter both have backgrounds in large scale fishing in Belgium and Iceland and have downsized from a fleet of beam trawlers. White Pearl is Cheetah’s beamiest catamaran at 3.7m with a LOA of 9.98m. Having ordered the Cheetah without a test run, both were delighted by the soft comfortable ride on the home voyage,even having time to stop several times to through the lines out.

“I’ve worked on a lot of boats. This design is unbeatable. It would be a miracle that anyone in the world could design a better under 10m angling boat.” Ivan Maertens, Marine Electronic Engineer who accompanied The Dezutters on the home voyage.

With perhaps one of the longest backgrounds in professional angling on the Dutch coast, Gerard has become very familiar with the sea handling capabilities of the Cheetah Catamaran and on taking delivery is even more delighted with the fuel consumption. On the return9 hour journey to Neeltje Jans in Holland the boat consumed just 2 litres per mile at 25 knots and 3850rpm.

“We had a very good trip with our new 9.7Cheetah “Bruinvis” to Neeltje Jans in Holland. We arrived at 19:45 hr (18:45 UK Time) at Neeltje Jans, covering 213 miles in less than 9 hours. Everything was working perfect. There was no need to refuel the boat during the trip and on arrival there was 15% fuel left. Very economic fuel use during this cruising speed. The Cheetah team did a great job.”

Both Cheetahs are powered by the twin Honda 250hp outboards and are to be converted to run on LPG with tank housing doubling up as a worktop on the aft cockpit. The cabins feature port side raised seating and dining areas with a complimentary starboard side galley. Forward of the dash is a large flat section ready for a mattress and a port side toilet.

Cheetah Marine are currently building a third Cheetah for Belgium which will feature an island style walkaround wheelhouse on the 9m series hull. This will be the first of its type and will enable full access to the bow for fishing. Current builds also include a leisure Cheetah for the Portuguese coast and a surf catamaran for the south of France. 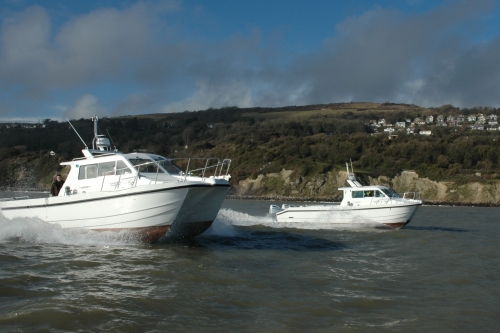