14 years on and Cromer Fisherman orders his second Cheetah

9.95m 'Laura Ann' has become a familiar site surfing up the beach at Cromer over the past 14 years. This Cheetah was the second of the 9.95m series designed by Sean Strevens back in 1995 and has been worked continuously by John Davies since he drove it home in 1996.

The Davies family has been fishing commercially from Cromer for over 8 generations. John Davies, as well as fully embracing the family tradition of fishing, followed in his father’s footsteps and is Coxswain to the Cromer Lifeboat. He has been hugely successful at moving his fishing business forward to accommodate the changes in the industry over the last 30 years.

When John first started fishing some 30 years ago it was from the original double ended Norfolk Crabber which gave the fishermen more flexibility when working in the surf. As the fishery moved further offshore John fished two boats, one from the tidal harbour at Wells some 12 miles along the coast and the original beach boat from Cromer which was perfect for the inshore fisheries. Eventually John decided to try and find a boat which would cater for both fisheries – a larger, faster boat which he would still able to work from the beach and achieve greater distances in rougher conditions. After seeing adverts for Geoff Blake's new 9.95m Cheetah Catamaran which worked from the surf beach at Ventnor, John visited and after having a run out ordered the second 9.95m. Power catamarans were still very much a new concept in the Europe at this time, with the exception of the Blythe workboats which were much bigger displacement craft,

The finished Catamaran 'Laura Ann' was delivered by sea in 1996. Sean, John and John's Father, Richard left at 8am one morning and arrived in Cromer 14 hours later. John worked the boat almost daily from Cromer beach for the next 15 years supplying his wet fish shop and the local market. In 1998, this time father followed in son's footsteps when John's dad Richard started fishing a 6.9m Cheetah, also from the beach at Cromer.

In 2010 John contacted Cheetah Marine again. He wanted to replace the old 'Laura Ann' with the new 10.2m Cheetah. Registered at 9.97m, the 10.2m Cheetah has wider keel centres giving a slightly wider beam and increased deck space. This means that the new 10.2m has a greater weight carrying capability than the original 9.95m. Heavier more powerful engines can be used and the 10.2m has been fitted with a full width wheelhouse which can be separated into an internal lockable area and semi open area with the front screen offering protection to the starboard side. John for the first time will have a chair in the wheelhouse as well as good protection from the elements when hauling.

The fit out of the new 'Laura Ann' is not alot different as the old one worked so well. We have gone for outboard power instead of jets this time. With a better power ratio we can keep higher speeds when carrying pots which means we will also fish further offshore

The new 10.2m is currently being completed in the Cheetah workshop and is scheduled for delivery within 6 weeks. Watch this site for more updates 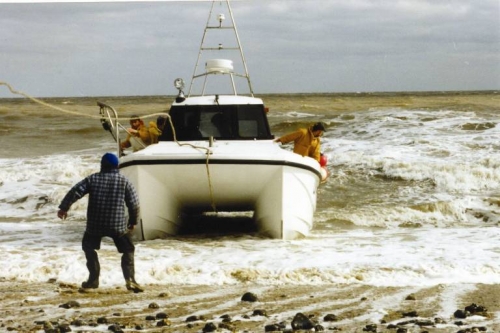