Cheetah Marine is a long established family run business with a very hands on approach. Determination and commitment by the Strevens Family has been key, facilitating the evolution of the Cheetah Catamaran from a small fishing boat to a range of internationally recognised power catamarans.

In 2012, Sean Strevens was nominated by the Royal Institute of Naval Architects and as a member of RINA. He continues to design and develop the entire Cheetah range.

The Cheetah Team now comprises of around 30 skilled boatbuilders, many of whom have worked on Cheetah Catamarans for over 10 years. The core management remains the dedicated Strevens family team alongside two Technical Engineers, Barry Sales and Simon Waring, capable of advising customers before and throughout the build process. With a wide variety of marine backgrounds and 25 years experience in boat building, Cheetah Marine have developed a very close knit team with an excellent work ethic.

The first Cheetah Catamaran was designed by Sean Strevens back in 1989. Sean was originally a commercial fishermen, potting for crab and lobster from a beach on the South coast of the Isle of Wight. After fitting out and working numerous small boats, Sean felt there were severe limitations when it came to working in rough seas and far too many days were lost particularly in spring and autumn when fishing was good.

Sean drew up a design which incorporated everything learned from beaching in surf in mono hulls. By choosing to design a catamaran hull the boat would always remain stable on the beach.

The first Cheetah 20ft 6” long and 8ft wide was built in a barn on the family farm. The construction was double diagonal marine ply and West Systems Epoxy resin. The frames were made from Tasmanian Oak taken from a dance floor of a local hotel which was being demolished.

‘Cheetah’ was launched in June 1989 from Shanklin beach. Powered by a single 55hp Mariner Two Stroke Outboard. The boat flew and was very stable at high speeds. In his first year of commercial fishing with Cheetah, Sean doubled his turn over. Two years later after considerable testing, Sean and his father Keith built a mould by using the original plywood catamaran as the plug.

With the success of the very first Cheetah Catamaran came a lot of interest from local inshore fishermen. They had seen the stability and load carrying capability and wanted a slice of the action. The first Cheetah went into production in 1991. With a steady stream of orders the newly formed Cheetah Marine employed a small team of highly skilled GRP Boat Building Specialists. Over the next few years, Cheetahs were ordered and delivered to all corners of the UK.

In 1994 local skipper Geoff Blake approached Cheetah Marine in search of a much bigger catamaran. The 9.95m Cheetah was born as a result and in 1995 Geoff launched Ventnor Pride II. Ventnor Pride became an infamous site at Ventnor, surfing up the beach daily in conditions where most fishermen wouldn’t dream of going to sea.

Twenty five years on, over 380 Cheetah Catamarans accommodating all manner of applications, have been designed and built by Cheetah Marine. The range now spans 6.2 to 11.2m and is continually growing.

Geoff Blake is still fishing Ventnor Pride II. Ventnor has become the leading fishing port on the Isle of Wight since the opening of Ventnor Haven in 2003 and Ventnor Pride III has been joined by 6 other Cheetahs all supplying the freshest fish to Geoff’s pier above the Haven.

As Cheetah Catamarans venture further afield with increasingly remote and wonderful applications, Cheetah Marine strives to develop the most innovative technical solutions for the small workboat market. Cheetahs are now gamefishing in Bermuda, transporting quads in remotest Africa, surveying with the latest multibeam echosounder technology across Europe and the Middle East, and exploring islands in the China Sea. Returning to British roots, Cheetah Catamarans continue to work as commercial fishing, survey, angling and practical pleasure craft from the majority of small harbours and ports around the British Isles. 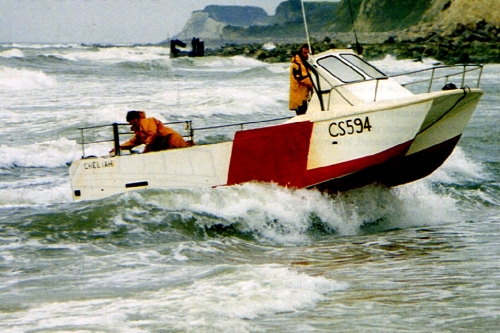