The first of four 7.9m hydrographic Cheetah Catamarans built at Cheetah’s UK base on the Isle of Wight has been delivered to The Turkish Navy in Istanbul. The fleet includes four of Cheetah Marine’s custom built trailers enabling the team to launch, recovery and transport the catamarans around the coast of both European and Asian Turkey. Cheetah 2,3 and 4 will be delivered in 3 monthly intervals following sign off of Cheetah 1.

The vessels will be primarily engaged in mapping the seabed and current profiles within the coastal areas as well as adjoining rivers within the Mediterranean and The Black Sea.

The specification remains identical for each vessel and includes Cheetah patented Moonpool and hydropod system designed to accommodate the specified transducer heads. The catamarans are supplied ready for fitting of R2 Sonic MBES and Motion sensor by Denar on arrival in istanbal. Cheetahs twin fin system removes the requirement for re-calibration following transit between survey sites.

Cheetah 1 has been tested with the new stern deck winch system, for deployment and towing of the Klein 3000 Sidescan Echosounder. The Cheetah system replaces the traditional and bulkier drum winch and features a cable counter which controls distance and depth of the towfish from the vessel. A portside frame and side mount accommodate the ADCP pole for current profiling.

Cheetahs triple disc braked axle trailer has been produced by Cheetah since 2007 and features auto reverse disc brakes essential when launching and recovering on steep or difficult slipways. The contract also includes training and maintenance programmes for the new crew and technicians which will be carried out from Ventnor.

Cheetahs 7.9m has been hailed the most compact and easiest transportable hydrographic survey package available worldwide accommodating such a wide scope of tasks whilst operating in a variety of range of sea conditions. 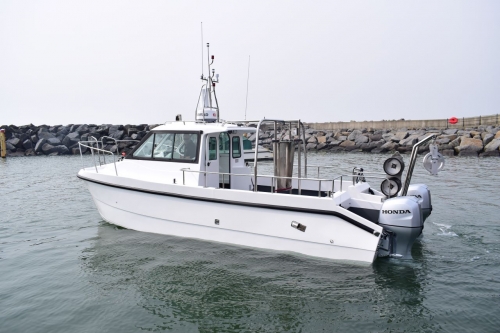