‘Little Cheetah’ is the original and most popular of the Cheetah designs. The set up is intended as a dayboat with fishing and leisure. The long style wheelhouse is simply set out with helm and navigator’s suspension seating with lots of space for storage of fishing gear and equipment. Outside, the large spacious deck forms an ideal platform for fishing. For added space, the twin Honda 50hp outboards are mounted onto aluminium pods behind the moulded transom giving a deck size of 3m long by 2.2m wide.

With a draught of just 30cm, ‘Little Cheetah’ can access shallower regions of Poole Harbour. The dual hull design enables her to be easily nosed up onto remote beaches and islands, sitting level on the sand whilst you hop down to explore or light up a BBQ. Stainless steel keel bands protect the hulls when fishing in the shallows around rocks and the engines can be trimmed and tilted independently giving excellent maneuverability in confined spaces.

New Owner, Alan Fuller who has been a passionate boater for many years will keep the 6.9m Cheetah alongside his other boat, a spectacular 45ft Broom. Alan said ’she will be used purely and simply for pleasure fishing, mainly around the Solent area with some extended day trips mid channel for bass and cod.’ Alan chose a Cheetah for its excellent stability with no rolling when fishing at anchor or drifting over wrecks.

Like the entire Cheetah series, the 6.9m is built to each customer’s individual specification, proving extremely popular with boaters that want or have to go to sea regardless of weather. Cheetah Marine work very closely with the customer before and during the build to ensure that each aspect of the boat will meet their given requirements.

Back on the Isle of Wight, the new Cheetah Fit Out Workshop at Ventnor Haven is producing Cheetahs at full pelt as we go into the second season. Production has increased to 25 catamarans a year and the added bonus of being sited next to the harbour also provides, repair and maintenance workshops for other Haven users. 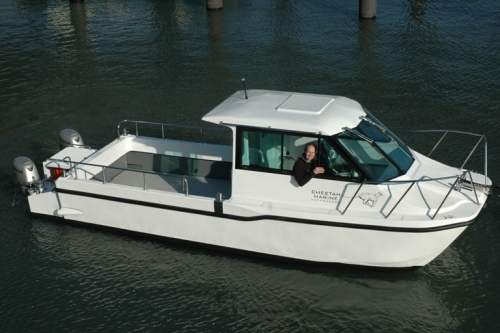